Over 80% of AMC shareholders are retail investors: AMC analyst

AMC Entertainment Holdings Inc. rose for the first day in three amid a broader advance in meme stocks and as regulators warned they are monitoring the frenzied trading in the group of shares for any signs of market manipulation.

The stock closed 15 per cent higher at US$55 on Monday. Its shares more than doubled on the first two days of a holiday-shortened last week, but gave back some of those gains after insiders cashed in with a flurry of share sales.

In a statement Monday, the U.S. Securities and Exchange Commission said it’s monitoring markets for manipulation and other forms of misconduct amid the frenzied surge in so-called meme stocks. “We will act to protect retail investors if violations of federal securities laws are found,” the agency said.

On the brink of bankruptcy only a few months ago, AMC is now the darling of retail traders, with this year’s near-2,500 per cent gain ranking as the most of any stock in the Russell 3000 Index. That’s despite calls from across Wall Street that the shares aren’t worth anywhere near where they currently trade. “The stock continues to not reflect fundamentals,” said Macquarie analyst Chad Beynon. “Retail traders are focusing on price and not what that translates to in terms of valuations,” he added. 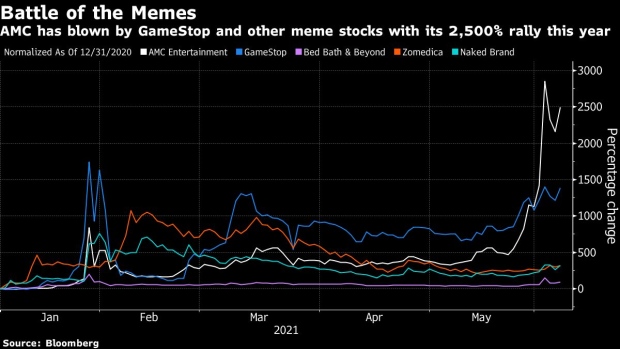 Still, the surge has enabled the company to sell equity and shore up its shaky balance sheet. AMC is building a “strategic war chest,” B Riley analyst Eric Wold wrote in a note.“In addition to our continued expectation that AMC could improve its balance sheet and future cash flows through debt repurchases/pay-downs, we could now see either acquisitions of smaller exhibitor chains or the takeover of leases from troubled chains,” he said.

Company insiders have also started to take advantage of AMC’s swift run up in share price. At least six people affiliated with the firm sold more than US$8 million of stock last week, according to regulatory filings with the SEC. Carla Chavarria, the company’s head of human resources, unloaded US$2.5 million worth of shares, while Gary Locke, who is up for re-election to the board, sold more than 34,000 shares for US$1.7 million.

A forthcoming reshuffle of the Russell Indexes could pose a problem for the likes of AMC and GameStop Corp., which started the meme stock craze back in January. Their enlarged market caps of US$24.6 billion and US$18.4 billion on Friday, respectively, put them in line for a move from the Russell 2000 small-cap stock index to the Russell 1000 index of the biggest American companies.

“The graduation of these high-fliers could be the beginning of the end of their epic run,” Wells Fargo analysts led by Christopher Harvey wrote in a note Friday.