AMC Entertainment Holdings Inc. rose for a second day and Wendy’s Co., the latest addition to the retail-trader frenzy, climbed to a record amid a broader rally in meme stocks.

Shares of the theater chain rose as much as 10 per cent, adding to Monday’s 15 per cent gain and continuing what’s been a wild ride for investors. Wendy’s jumped as much as 19 per cent to notch a record as the fast-food restaurant operator gained traction on social media, including several touts on Reddit’s WallStreetBets forum. So-called meme stocks broadly gained Monday.

Clover Health Investments Corp. also rallied as it was among the most mentioned companies in Stocktwits over the last day. The Chamath Palihapitiya-backed health insurer surged as much as 59 per cent, the most ever, after Monday’s 32 per cent advance. Clover Health short interest as a percentage of float is about 42 per cent, data from financial analytics firm S3 Partners show.

“The power of the network effect of social media entices more people to get involved, so then they start broadening their horizons, looking for other names that have high short interest and things like that,” said Michael O’Rourke, chief market strategist at JonesTrading. 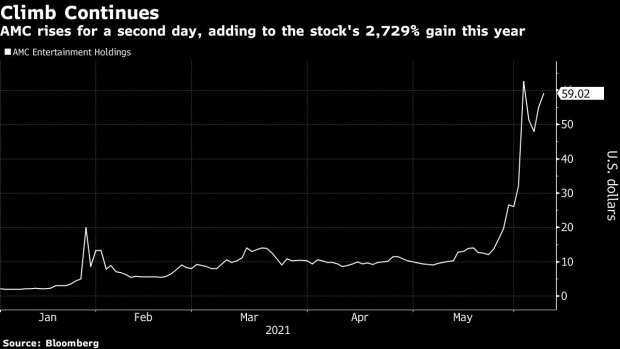 GameStop Corp., the original icon among retail traders, surged as much as 21 per cent to the highest in almost three months ahead of quarterly earnings results, which are expected Wednesday.

MKM Partners analyst Eric Handler said in a note Tuesday that AMC should focus on debt reduction with its newly raised capital rather than acquisitions. He rates the stock sell with a US$1 price target.

“Management has been gifted an unforeseen opportunity from the recent wave of (fanatical) retail investor momentum, which has pushed the shares far above historical valuation levels,” Handler wrote.

AMC company insiders have continued to take advantage of the stock’s run-up in price. Board member Howard Koch Jr. divested more than US$790,000 of shares on Monday, according to a filing with the U.S. Securities & Exchange Commission. Last week, AMC executives and directors sold US$8 million in shares.