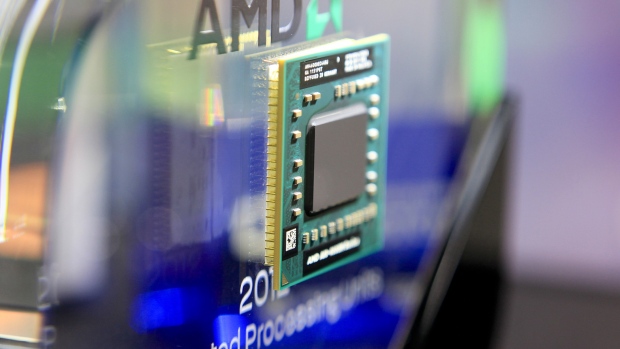 Advanced Micro Devices Inc. (AMD.O) gave a quarterly sales forecast that was in line with analysts’ estimates, indicating renewed momentum in its bid to take market share from Intel Corp. in microprocessors. Shares jumped more than 8 per cent in late trading.

Second-quarter revenue will be about US$1.52 billion, Santa Clara, California-based AMD said Tuesday in a statement. That matched the average analysts’ projection compiled by Bloomberg. The company also posted sales for the first quarter that exceeded predictions, buoyed by demand for personal-computer processors.

Chief Executive Officer Lisa Su has promised that a raft of new products AMD debuted over the past two years will help her carve out a more profitable and sustainable chunk of the market for PC chips. Investors have bid up AMD stock, which has more than doubled in the past year, on optimism that she’ll reach that goal, but are looking for evidence in the company’s results.

Throughout its 50-year history, AMD has struggled to seriously challenge Intel, which has kept its smaller rival confined to well under 20 per cent market share in personal-computer processors. Now, for the first time, Intel is struggling with one of the central pillars of its success -- advanced manufacturing leadership. That’s giving AMD, which contracts its production to Taiwan Semiconductor Manufacturing Ltd., the chance to win orders with its design capabilities, according to analysts.

AMD shares, up 50 per cent this year, closed at US$27.63 in New York on Tuesday. They climbed as high as US$29.95 in extended trading following the announcement.

Last week, Intel gave a disappointing sales forecast for the second quarter and slashed its predictions for 2019, citing weaker-than-expected demand for server chips. That fueled speculation that AMD was beginning to make gains in the most profitable segment of the market, where some chips sell for the price of a compact car.

AMD’s first-quarter net income was US$16 million, or 1 cent a share, compared with US$81 million, or 8 cents, a year earlier. Excluding certain items, profit in the recent period was 6 cents, better than analyst predictions for 5 cents. Revenue in the period was US$1.27 billion, 23 per cent lower than a year earlier but topping analysts’ average projection of US$1.26 billion.