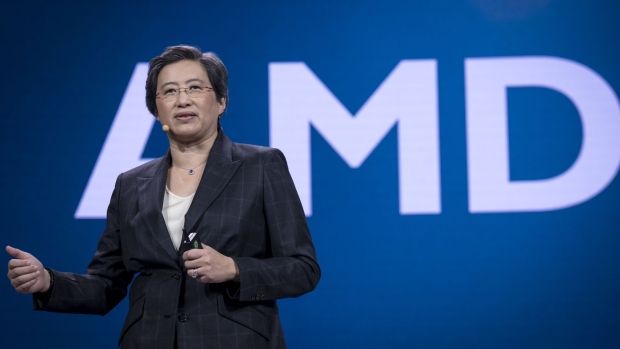 (Bloomberg) -- Advanced Micro Devices Inc. gave a strong forecast indicating market share gains, particularly in servers, are helping it make up for tight supply.  Fourth-quarter revenue will be about $4.5 billion, plus or minus $100 million, Santa Clara, California-based AMD said Tuesday. That compares with an average analyst estimate of $4.25 billion. The company is now on course to exceed an earlier forecast and post a sales gain of 65% for the whole of 2021, it said.

Under Chief Executive Offer Lisa Su, the 52-year-old company is experiencing one of its strongest ever periods, offering products that are the equal or surpass those of larger rival Intel Corp. AMD’s growth, relative to that of its competitor, indicates the company is gaining market share.

Data center sales in the fourth quarter more than doubled from a year earlier, AMD said in the release.

AMD’s chips are made by Taiwan Semiconductor Manufacturing Co., which has surpassed Intel in production technology. TSMC also supplies Apple Inc., Qualcomm Inc., Nvidia and many other technology companies, and the Taiwanese company is struggling to keep up with demand. Last week Intel reported revenue grew 5% in the third quarter. Its PC-related processor business sales declined around 2%. The world’s largest chipmaker’s data center business expanded 10% helped by demand from corporations. Revenue from so-called hyperscalers -- the owners of large data centers that are the backbone of the internet -- dropped.