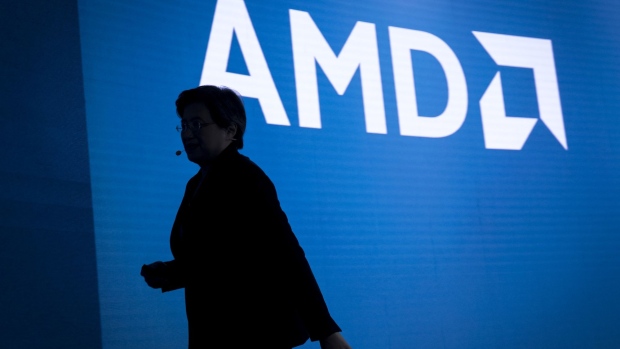 Revenue in the first three months of the year will be about US$1.8 billion, plus or minus US$50 million, Santa Clara, California-based AMD said Tuesday in a statement. That would fall short of the average analyst projection of US$1.87 billion, according to data compiled by Bloomberg.

AMD also projected sales in 2020 will increase 28 per cent to 30 per cent. That compares with an average of analysts’ estimates of 28 per cent growth.

The stock has surged to more than US$50 this year up from less than US$3 at the end of 2015 as investors bet its new products, and manufacturing stumbles by Intel, would open the door to sustained market share gains.

The company’s shares declined about 2 per cent in extended trading following the report. They gained 148 per cent last year making them the best performer on the S&P 500 Index. The stock earlier closed up 2.6 per cent at US$50.53.

AMD has said it’s targeting double-digit market share in servers by the middle of this year. The company is trying to reclaim a meaningful position in that lucrative market after dropping to less than 1 per cent. Server computers are the backbone of corporate networks and the giant data centers that run the internet. Chips that power them can cost more than US$10,000 each.

Intel’s server chip unit grew 19 per cent in the fourth quarter and revenue from cloud-service providers, which offer computing power and storage via the internet, surged 48 per cent. Intel’s data center business gets more revenue in a quarter than the whole of AMD reports in year.

Both companies have benefited from persistently strong demand for personal computers. Global PC shipments rose 2.3 per cent from a year earlier in the fourth quarter as companies upgraded to a new version of Microsoft Corp.’s Windows operating system, according to research firm Gartner Inc. AMD has an even greater ability to cash in on this as it’s also the second-largest maker of chips used in computer graphics cards.On Tuesday, AMD said fourth-quarter net income rose to US$170 million, or 15 cents a share, compared with US$38 million, or 4 cents, a year earlier. Excluding certain items, profit in the period was 32 cents a share. Revenue gained 50 per cent to US$2.13 billion. Analysts had projected profit of 30 cents a share on sales of US$2.1 billion.