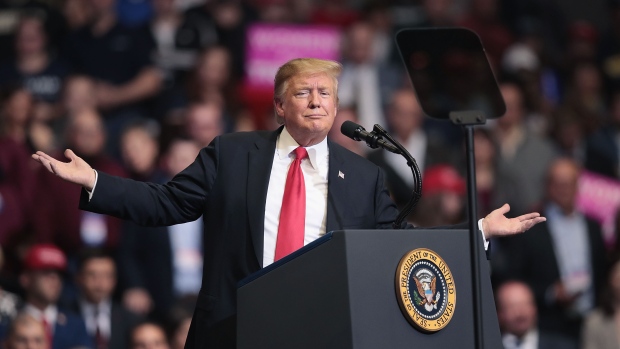 (Bloomberg Opinion) -- Amid the endless chaos of the Trump administration’s foreign policy, the president’s supporters claim that he deserves credit for focusing on the things that really matter. The president may be unorthodox, in this telling, but he and his advisers have pushed the U.S. to confront the geopolitical and ideological threats posed by aggressive, authoritarian regimes in China and Russia.

That argument isn’t entirely wrong: As I have argued, the administration has performed a service in explicitly calling for a more competitive approach to China. Yet the its decision last week to try to drive Iranian oil exports down to zero —announcing it will no longer waive sanctions on eight countries that purchase Iranian oil — reminds us that this argument goes only so far. By ramping up the pressure on Iran, the administration is raising the risk of a crisis in the Middle East. It is also showing that it lacks the ability to perform that most crucial grand-strategic task: Establishing priorities among the many challenges a superpower faces.

Grand strategy — the use of all forms of national power to achieve a country’s highest objectives — is “grand” because it requires bringing together a vast array of policies into a coherent whole. It requires ruthlessly setting priorities, because there are never enough resources and attention to go around. Grand strategy, in other words, is about determining what battles to avoid as well as what battles to fight.

This imperative is particularly important today, given that Washington is increasingly being tested by so many enemies and rivals — China, Russia, North Korea, Iran, terrorist organizations and others — just as its margin of dominance has slipped. And this is where the Trump administration has struggled.

Yes, the strategy documents say the right things. The National Security Strategy clearly describes how China and Russia — America’s two most formidable challengers — are threatening to reorder the international system. The National Defense Strategy explicitly ranks the threats America confronts, placing China and Russia far ahead of rogue states and terrorist groups. Yet nearly everyone associated with these strategy documents has now departed the administration, empowering a president who has a penchant for taking strategic detours.

During 2017, the president indulged this penchant by engaging in a high-stakes confrontation with North Korea over its nuclear and missile programs — a real problem, no doubt, but one that also reportedly diverted the administration from stronger efforts to address China’s creeping expansionism in the South China Sea. The president has also consistently undercut his own economic confrontation with China by simultaneously fighting trade battles with U.S. allies. This same non-strategic mindset is at work in his intensifying campaign against Iran.

Make no mistake: The Iranian government is brutal and authoritarian. It has the blood of U.S. service-members and civilians on its hands, and it has been spreading its influence throughout the Middle East. The Iran nuclear deal negotiated by the Obama administration was imperfect, because of its relatively short timeline and failure to address missile tests, terrorism and other dangerous aspects of Iranian behavior. Some ongoing, multilateral effort to contain Iran, through support to regional allies, maintaining a U.S. military presence in the Middle East, tightening sanctions related to terrorism and missile activities, and figuring out how to keep Iran’s nuclear program in check after the agreement expired was always going to be necessary.

What is unwise, however, is pursuing a policy that increases the risks of a crisis with Tehran when U.S. focus and attention are needed elsewhere, and that puts added pressure on relationships Washington will need to confront Moscow and Beijing. Yet this is just what the Trump administration has done.

First, Trump withdrew from the nuclear deal, even though the European allies were willing to help the U.S. take a tougher stance on Iranian missiles, regional influence and other issues. He lessened the impact of that move — and the re-imposition of U.S. sanctions that followed — by issuing waivers to eight countries so they could continue to import Iranian oil without being cut off from the U.S. financial system.

More recently, however, Trump has ratcheted up the pressure. In early April, the administration designated the Iranian Revolutionary Guard Corps as a foreign terrorist organization. Last week, the administration announced it would seek to zero-out Iranian oil exports, by declining to renew the sanctions waivers. (That decision meaningfully affects only five countries — India, Japan, South Korea, Turkey and China — because Taiwan, Italy and Greece had used the initial waiver period to wind down imports from Iran.)

This act marked the culmination of Trump’s visceral opposition to the Iran nuclear deal, and it shows the influence of a national security adviser — John Bolton — who has long argued that the U.S. simply cannot do business with the regime in Iran. Yet it seems unlikely that this approach will succeed in forcing Iran to negotiate a new and better nuclear deal, because the administration’s preconditions entail a wholesale re-orientation of Iranian foreign policy. Instead, Trump’s approach could prove grand strategically counterproductive, in two respects.

First, it raises the risk of a crisis. This is by no means assured - Tehran may simply absorb the pain and hope for a more accommodating U.S. president in 2021. But Iran could also respond to economic hardship by seeking counter-leverage on Washington, perhaps by using its network of proxies to put pressure on the American military presence in the Middle East, resorting to terrorist attacks against American or allied targets, or reducing its compliance with the restrictions it accepted as part of the nuclear deal. If U.S.-Iran tensions escalate, or Iran takes strong action against Israel or other American friends in the region, U.S. policymakers will find themselves increasingly absorbed by Middle Eastern troubles, no matter what the administration’s strategy documents say.

Second, this move will weaken relationships that need to be strengthened. Even European allies that agree, in principle, on the need to contain Iranian influence are deeply concerned by the aggressive use of U.S. financial power to dissuade other nations from buying Iranian oil. The end of the sanctions waivers will also hit countries — especially India, Japan, and South Korea — that Washington needs to keep onside in a competition with China. That the decision to end the waivers apparently surprised at least some of the countries affected will only reinforce the perception that Trump’s America is an abrasive, unilateral superpower.

To be sure, most of the affected countries will not risk their relationships with Washington just for the ability to import oil from Iran. The creation of an alternative mechanism for international payments that circumvents the U.S. financial system remains a pipe dream, at least in the near term. But at a time when the U.S. should be building the broadest possible coalitions to deal with Russian and particularly Chinese ambitions, Washington is spending down its diplomatic capital on issues that are comparatively peripheral. And that is the exact opposite of wise grand strategy.

To contact the author of this story: Hal Brands at Hal.Brands@jhu.edu

Hal Brands is a Bloomberg Opinion columnist, the Henry Kissinger Distinguished Professor at Johns Hopkins University’s School of Advanced International Studies, and senior fellow at the Center for Strategic and Budgetary Assessments. Most recently, he is the co-author of "The Lessons of Tragedy: Statecraft and World Order."