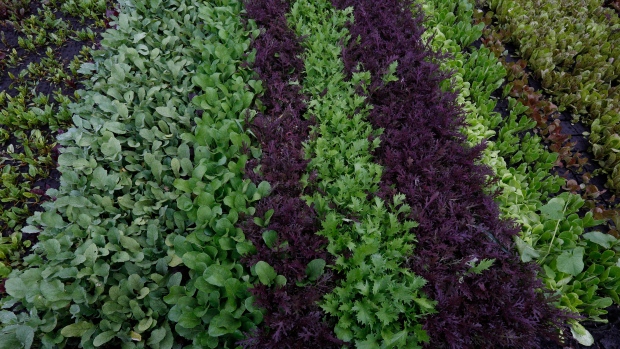 It is quite possible 2020 will be remembered as a turning point in American history, a moment after which the country became irretrievably different from what it had been before.

Yes, that’s right, this could be the year consumption of romaine and other leaf lettuce finally surpasses that of head lettuce, which is mostly iceberg lettuce.

Then again, it might not be. The 2019 data, released in September, actually show lettuce heads doing slightly better against lettuce leaves than in 2017 and 2018 (ahead by 0.3 pounds instead of 0.1). Perhaps New Yorker magazine food correspondent Helen Rosner’s August 2018 manifesto, “It’s Time to Admit That Iceberg Is a Superior Lettuce,” turned the tide.

Still, it’s been quite the comedown over the past three decades for America’s lettuce, introduced by seed purveyor W. Atlee Burpee & Co. in 1894. The standard explanation is that the great American food awakening that began in 1961 with the publication of Julia Child and Simone Beck’s “Mastering the Art of French Cooking” and Craig Claiborne’s “The New York Times Cookbook” led to an embrace of lettuces and other greens more flavorful and less watery than what filmmaker John Waters once called “the polyester of greens.”

Or as Nora Ephron put it in a 2006 New Yorker recounting of her cooking experiences, “arugula was discovered” in the mid-1960s,

That history is not inaccurate, at least from the perspective of a Manhattan gourmet. But head lettuce consumption actually didn’t peak nationally until 1989. That happens to be when, after more than 20 years of trying, California grower Fresh Express (now a subsidiary of Chiquita Brands Inc.) finally figured out how to put pre-cut, pre-washed salad greens in a bag and keep them fresh.

Before then, sturdy, compact iceberg heads had a big advantage over other lettuces in ease of transport and use. After that, not so much. As Burkhard Bilger described in a 2004 New Yorker article, a protege of the great California chef (and iceberg-lettuce-detractor) Alice Waters named Todd Koons seized upon the new technology as a way to deliver mesclun and mache to the masses in supermarkets across the country. You can learn a lot about lettuce from reading the New Yorker!

You can also learn a lot about lettuce, and other leafy greens, from the per-capita food availability data released by the U.S. Department of Agriculture each summer and fall, from which the chart above is derived. These statistics don’t exactly measure what Americans eat; the USDA’s Economic Research Service uses agricultural production and import/export data to calculate how much food is out there to be consumed. But they provide the longest-running proxy measures of food consumption available, with numbers on some foods (meats and dairy products, mainly) going all the way back to 1909. As such they offer an unparalleled view into culinary fashion, societal change and technological progress.

The numbers on leafy greens don’t go back to 1909. Some only date to the late 1990s. But even those can tell interesting stories. Consider kale, a relative newcomer to USDA recordkeeping. Per-capita availability quadrupled from 2006 to 2017.

About year ago, journalist Amanda Mull unleashed a brief but intense national debate with her assertion in The Atlantic magazine that, after having “entered into the cultural lexicon” in the early 2010s “as a status symbol for a generation of young adults drawn to conspicuous health-consciousness,” kale is on the way out because it doesn’t taste good.

Supermarket data do show sales stopped rising a couple of years ago. But as the above chart hints, oversupply may be part of the explanation too. The acres of kale harvested in this country jumped from 6,256 in 2012 — when food magazine Bon Appetit deemed the crispy kale salad at Brooklyn restaurant Battersby its “Dish of the Year — to 15,235 in 2017.

It’s possible the nation’s farmers got a bit ahead of the market. And yes, it really is the nation’s farmers: California is responsible for about half the acreage, and South Carolina and New Jersey have a lot too, but kale is now planted in every state. In 2017, the most recent year for which data are available, there were even nine acres harvested in Alaska.

Overall, consumption of dark, often tough leafy greens such as kale seems to be on a modest uptrend, albeit with big cyclical fluctuations. Such greens are generally perceived as health foods; and, well, affluent people like to buy health foods (if not necessarily eat them). Maybe turnip greens will have their big moment next!

Spinach has of course been having its moment for quite a while. But how it makes its way into the country’s kitchens and mouths has changed a lot over the decades. In 1960 cans were the dominant delivery mechanism — as they had been for decades, if the Popeye cartoons are to be believed — and frozen packages in second place. Now 75 per cent is purchased fresh.

The rise of bagged, pre-washed spinach explains a lot of this. It has also been linked to the occasional E. coli outbreak, as have other bagged greens. Not every consequence of this technological innovation has been positive.

Canning has also lost market share among cabbage eaters (from 21 per cent in 1970 to 9 per cent in 2019), but here the causes seem more cultural than technological. Although I have been doing my best to keep up my sauerkraut consumption, the rest of the nation clearly has not. Meanwhile, fresh cabbage consumption is down too, I’m guessing because people have been eating less cole slaw. 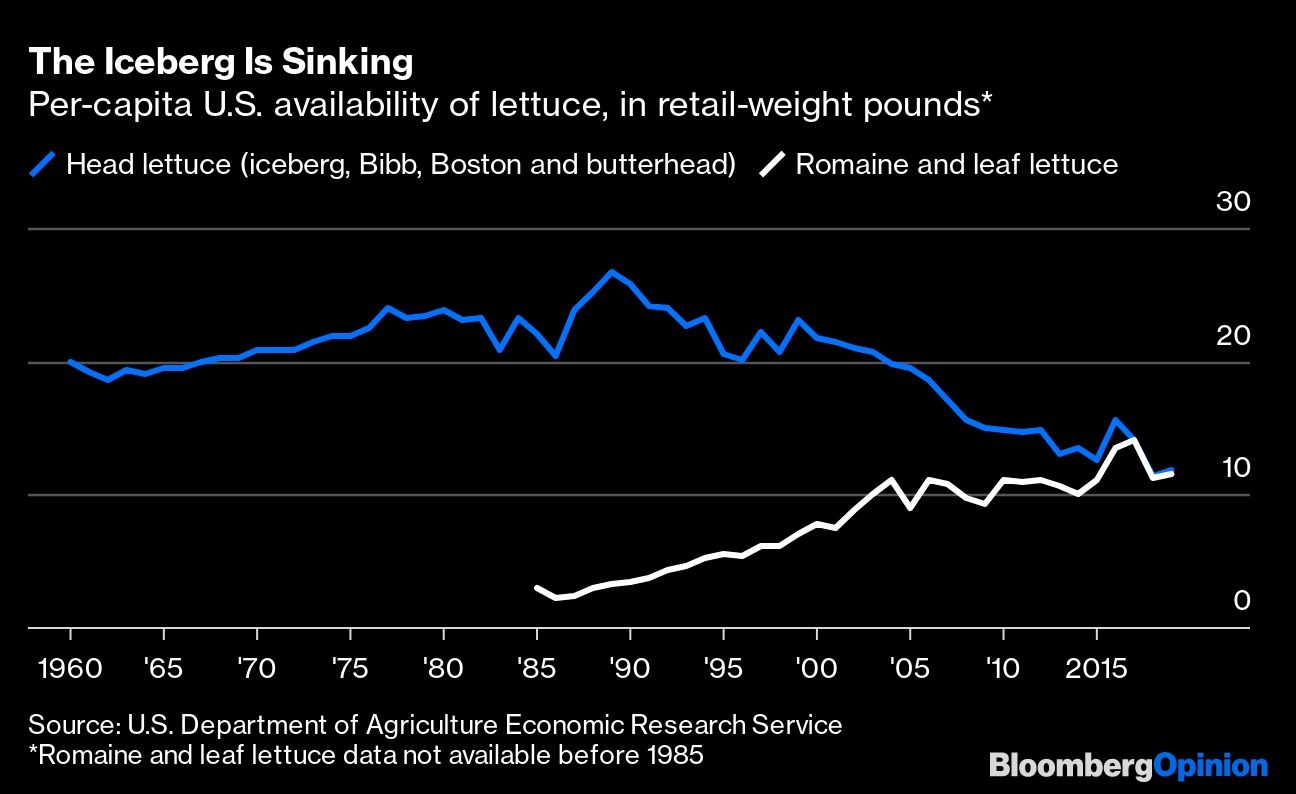 What this appears to be is the compounding of two trends. The first is a pushing aside of long-time American staples such as cole slaw(2) and iceberg lettuce in favor of ostensibly more sophisticated fare.

The second is the disappearance of certain ethnic food traditions as that ethnic group (in this case German-Americans) becomes almost completely assimilated. These are often replaced by new ethnic food traditions. Per capita availability of processed chili peppers has more than doubled in the U.S. since the early 1980s. And cabbage isn’t quite down for the count yet; it’s also a key ingredient in the Korean staple kimchi. And sales of both kimchi and sauerkraut reportedly skyrocketed early in the pandemic as Americans sought out foods that could keep for a long time.

There might be a few metaphors here appropriate for describing a moment when an assimilated German-American president who has often invoked heartland American values and demonized recent immigrants is struggling to maintain his hold on power. But I’ll leave that to someone else (you know where to find the data!) and conclude instead with a look at endives and escarole, which along with the aforementioned radicchio and frisée are all members of the chicory family.

Nora Ephron wrote of the discovery of the endive in the 1960s or 1970s, but I get the impression it was widely used before then in hors d’oeuvres and other dishes. As for its cousin escarole, it is most associated with Italian cuisine. Italian-Americans have, like German-Americans, become a much less distinct ethnic group than they used to be, and escarole-rich Italian wedding soup hasn’t really gone mainstream like pizza has.

One cannot blame Craig Claiborne, Alice Waters or their ilk for the decline here. Waters devoted 11 pages to escarole, endive and other chicories in her 1996 classic “Chez Panisse Vegetables.” But one of the only leafy greens the USDA deemed important enough to keep track of in 1960 has seemingly become an also-ran. Having cooked escarole several times this year and found it be OK but also a lot of work, I think maybe we can just chalk this one up to the wisdom of crowds.

(1) Yes, the name comes from the Dutch "kool sla" (cabbage salad), but if this ever was a mainly Dutch-American food it ceased being so a long, long time ago.