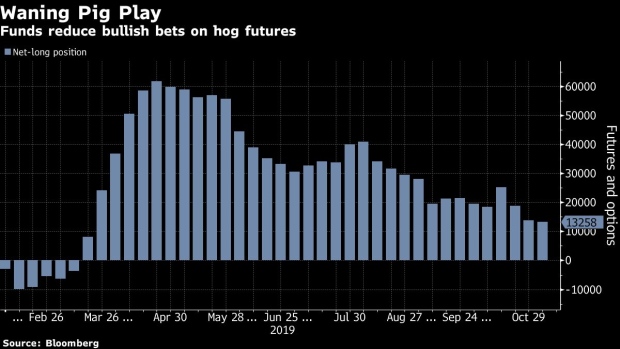 An employee restocks shelves with pork in the meat section at a Kroger Co. supermarket in Louisville, Kentucky, U.S., on Tuesday, March 5, 2019. Kroger Co. is scheduled to release earnings figures on March 7. Photographer: Luke Sharrett/Bloomberg , Bloomberg

(Bloomberg) -- The deadly pig disease that’s destroying China’s hog herd has sparked a global frenzy around meat supplies and lifted pork prices all over the world -- everywhere, that is, except in the U.S.

While that’s good news for American bacon eaters who are still enjoying relatively cheap rashers, it’s troubling for farmers dealing with a glut and thin profit margins. Hedge funds, meanwhile, seem to be losing patience with the U.S. hog market.

African swine fever’s rapid spread has killed millions of pigs in China, the world’s top pork producer and consumer. Even as the Asian nation has signaled it’s ready to import record amounts of meat to deal with the supply gap, Chicago hog futures have been basically stagnant for weeks. That’s because bulging American production has minimized the impact of rising exports, which have also been limited by the ongoing U.S.-China trade war.

While many analysts expect that supplies will ultimately get worked through as China continues buying more, some investors are getting tired of playing the waiting game.

Money managers cut their net-long position in hogs for a third straight week. The holding, which measures the difference between bets on a price increase and wagers on a decline, was at 13,258 futures and options as of Nov. 5, the smallest in seven months, according to U.S. Commodity Futures Trading Commission data on Friday.