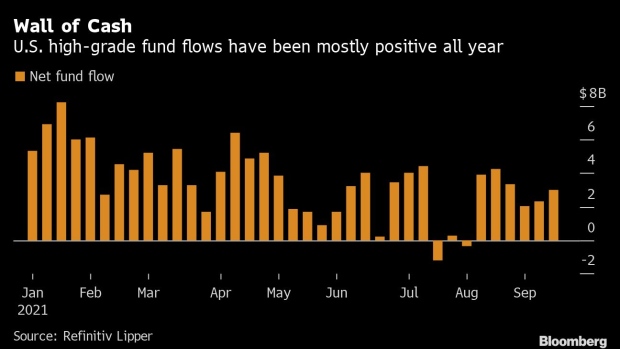 At least eight blue-chip companies that had planned to sell bonds decided to stand down, underwriters said. Worries about Evergrande pulled down equities around the world, including about a 2% decline in U.S. stocks. A key barometer of high-yield investors’ risk aversion, the Markit CDX North American High Yield Index, weakened.

This may all be just a blip. High-grade companies often refrain from selling debt when there are steep moves in bonds, as was the case on Monday, with the 10-year Treasury yield falling by around 0.05 percentage point to 1.31%. China Evergrande is seen by many strategists as only a peripheral concern for the U.S. credit market for now, and all month long corporate debt has rallied even as companies have sold more than $118 billion of high-grade debt in September, an eye-popping amount.

But these concerns are coming at a critical time for U.S. corporate debt. A wave of junk bonds funding acquisitions are due to hit the market in the coming weeks most notably those helping to finance the buyout of Medline Industries Inc., the biggest LBO since the financial crisis. Markets have so far been good at absorbing debt sales, with risk premiums for high-grade U.S. corporate bonds close to their lowest levels in years, averaging just 0.85 percentage point as of Friday’s close. It’s not clear how long that will persist.

“With the market priced as well as it is, it doesn’t take much to start the selling,” said David Knutson, head of U.S. fixed income product management at Schroders Plc.

That’s the fear. Strategists from JPMorgan Chase & Co. wrote on Monday morning that risks to corporate bonds in the near term are to the negative side. This week’s Federal Reserve meeting is potentially a negative catalyst, particularly if the central bank suggests that a November taper is likely, the JPMorgan strategists wrote.

“Tapering, and the uncertainties it brings adds to the uncertainty of how the Evergrande situation will play out,” said Schroders’s Knutson.

Evergrande will probably not have a huge impact on U.S. credit markets, wrote Peter Tchir, head of macro strategy at Academy Securities, in a note dated Sept. 19. While the company has borrowed heavily, its debt is not included in the two biggest U.S. high-yield exchange-traded funds, signaling that passive investors don’t hold it widely, he wrote. Money managers that own it likely studied the credit and knew the risks they were taking, and the bonds are trading at around 25 to 30 cents on the dollar, meaning the pain is already reflected in market prices and there won’t likely be panic selling.

Even if Evergrande itself is not a huge concern though, investors may grow worried about broader credit issues in the nation. Bank of America Corp. said in July that distress in China was the most significant risk to global credit markets now. That fear is probably more pronounced in high-yield, where China is the second-largest domicile of U.S. dollar debt, Bank of America strategists wrote.

A selloff in crypto is dealing another blow to Coinbase Global Inc.’s junk bonds, which already rank among the worst-performing new issues of recent months.

Primary market participants are predicting another heavy week for sovereign, supranational and agency issuance, aided by the debut green gilt for the U.K., according to a survey conducted by Bloomberg News on Sept. 17.

Contagion from China Evergrande Group is spreading in Asian credit markets as the distressed developer and largest issuer of junk bonds in the region faces interest payment deadlines.