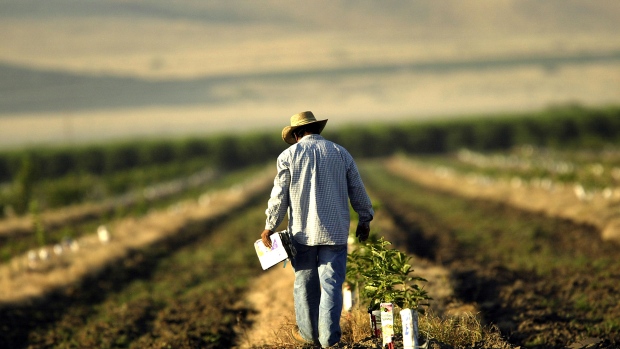 Farmers have a tough road ahead after the trade war. , Photographer: David McNew/Getty Images

(Bloomberg Opinion) -- President Donald Trump would love nothing more than to announce an end to the trade war with China and relief for the country’s farmers, who have been hit especially hard. But history is likely to get in the way for reasons well beyond his control.

In the past century, American agriculture sustained two big boom-and-bust cycles. The current downturn features a familiar combination of factors that led to both: First, rising exports fueled growth. Then the government supercharged it. Inevitably, things went bust.

The first great boom arrived with the outbreak of World War I. As Europe descended into war – and men left farms to fight – many countries turned to the U.S. for wheat, corn and other crops. Most commodity prices ended up doubling.

In 1916, the federal government stoked the fire with the Federal Farm Loan Act, which extended long-term financing to farmers. It proved to be a popular program for an industry seeing nothing but prosperity on the horizon.

When the war ended, European nations ramped up their own agricultural production, creating a global glut. Prices fell by half, and the value of farms, which had hit record levels, collapsed. Farmers began defaulting on mortgages over the course of the 1920s.

This slow-moving crisis came to a head in the Great Depression, particularly after protectionist tariffs killed what was left of a once-vibrant export market. Farmers went bankrupt en masse, and they helped send President Herbert Hoover packing when they joined the New Deal coalition. Under President Franklin Roosevelt, farmers became the beneficiaries – or the victims, depending on your perspective – of a staggering array of subsidies and price controls.

American agriculture eventually recovered, but in the 1970s, the now-familiar ingredients of the boom-and-bust cycle – government aid and export-led growth – returned. But this time it wasn’t war that fueled the farming bonanza. Rather, it was an unusual combination of geopolitical events and tax policies that got things going. The end result was the same.

In the early 1970s, President Richard Nixon took the U.S. off the gold standard, setting in motion the transition to a system of flexible exchange rates. The dollar’s value declined precipitously and inflation started to rage out of control. Bad news for the nation’s economy, yes, but good news for its farmers: They could now compete with other big agricultural exporters like Argentina.

After a number of other nations sustained crop failures, U.S. farmers began raking it in. They even began exporting massive amounts of grain to the Soviet Union. Between 1970 and 1973 alone, grain exports and farm income – measured in constant dollars – more than doubled.

At the same time, the federal government kept many of the price supports and other subsidies in place, making the agricultural sector look like a surefire place to invest money, particularly as inflation eroded the purchasing power of cash. Farmers kept borrowing money to buy land, simply to gather more of an asset that only increased in value.

Government tax policies – a combination of investment credits and accelerated depreciation schemes – encouraged farmers to keep expanding. One farmer who kept buying land and equipment was interviewed by the New York Times. Every morning, he “woke up $8,000 richer” thanks to rising property values, he said.

The result was a repeat of the 1920s: foreclosures, bankruptcies of farm equipment dealers and other unpleasantness. Farmers vented their anger in the election of 1980, helping make Carter a one-term president. But the crisis continued to play out over many years. By the end of the 1980s, everyone was talking (or singing) about the plight of the American farmer.

The cycle is now repeating itself in the 21st century. This time, it is China rising as the most visible buyer of American crops, particularly soybeans. Yet again, Washington made matters worse.Back in 2005, a new federal program made its debut: the Renewable Fuels Standard. Offering huge incentives, it helped lead to a 10-fold increase in the corn produced for ethanol.

The combination set up American farmers for another reckoning. But unlike earlier episodes, responsibility for the snowballing crisis lies with one man: President Trump. His trade war with China has savaged farmers dependent on exports. At the same time, the Environmental Protection Agency began exempting refineries from requirements to add ethanol to gasoline and other fuels.

Trump may be the catalyst for the coming crisis, but historical patterns suggest this moment would have come sooner or later, regardless of who was president. For the third time in the past hundred years, the nation’s farmers have been riding a speculative wave driven by exports and government programs. And now it’s coming to an end.

That means we’ll be hearing more about farmers’ woes in the coming presidential election. And while the nation's farmers may no longer have the political clout they once did, Trump shouldn't take them for granted. It’s a lesson that Herbert Hoover and Jimmy Carter learned the hard way.

To contact the author of this story: Stephen Mihm at smihm1@bloomberg.net

To contact the editor responsible for this story: Mike Nizza at mnizza3@bloomberg.net

Stephen Mihm, an associate professor of history at the University of Georgia, is a contributor to Bloomberg Opinion.