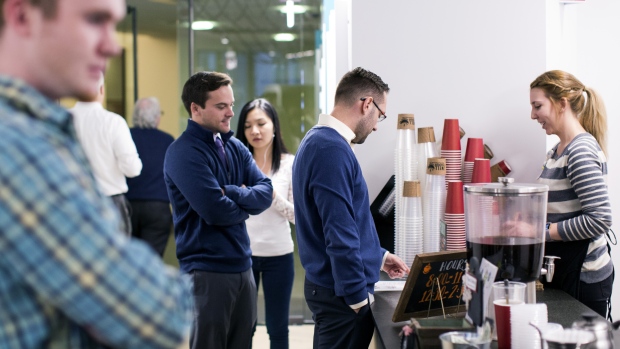 Lately I’ve been losing track of how old everyone is. Friends, co-workers and family members are resisting middle age with vigorous exercise, careful diets and regular doctor visits. Even when 50-year-olds look like they’re 50, they often dress or party as if they’re still in their twenties.

Our capacity to fetishize youth never ceases to amaze. But while older Americans definitely want to look like younger folks, they certainly don’t want their finances. That’s because the wealth gap between generations keeps widening, and their children’s future is beginning to look ugly.

Just two years ago, the median American born in the 1980s—the cradle of millennials—had family wealth that was 34 per cent below what earlier generations held at the same age, the Federal Reserve Bank of St. Louis reported last month. And all the data show it’s probably going to get worse.

As affluent baby boomers thank years of soaring markets for their paid-off mortgages and plump portfolios, millennials and the next cohort, Generation Z, are weighed down by student debt and stagnant wages. They can only contribute the bare minimum to their retirement plans and struggle to find affordable homes within commuting distance of their jobs.

Of course, it’s perfectly normal for people just starting out to have less in the bank. However, the St. Louis Fed warned that, even when taking that into account, young Americans are slipping dangerously behind. For a time, Generation X was also losing out, thanks to the 2008 financial crisis. But its members managed to make up most of the shortfall in the years since, tapping into the longest economic expansion in decades.

Personal Investor: Why millennials are more trusting of the investment industry than boomers

Dale Jackson looks at a new survey on trust in the investment industry.

For some reason that period of tremendous growth barely helped millennials. The St. Louis Fed called this anomaly “a missed opportunity because asset appreciation is unlikely to be as rapid in the near future.” That’s pretty bad news for twenty and thirtysomethings who may have been hoping to catch up. But it gets worse.

By 2034, Social Security won’t be able to pay out full benefits, the program’s trustees estimated this month. Any solution that would rectify its finances will probably require more taxes and more benefit cuts—all coming out of the pockets of younger workers. Boomers, who are exiting the workforce in droves, will already be comfortably seated when the music stops, or out of the picture.

“We turned the economy into a miserable hellscape and you’re just going to have to deal with it.”

Fixing Social Security is hardly the only issue where younger Americans have different priorities than their elders. U.S. President Donald Trump was elected on the votes of older Americans favouring tax cuts and less government, while young voters flocked to Senator Bernie Sanders, who supports rebuilding social programs and establishing national healthcare.

Alicia Munnell, the director of Boston College’s Center for Retirement Research, recently lamented that government inaction on Social Security means “that most baby boomers have escaped completely from contributing to a solution.” This month, she offered some depressing advice to younger Americans about what they can do to make up the difference: Work longer.

The reaction to her earnest advice was rage.

“Wait, this is the good news?” read one indignant post on Twitter, echoing many others. Slate’s Jamelle Bouie called it “a great example of ‘we turned the economy into a miserable hellscape and you’re just going to have to deal with it.’”

Ouch. But Munnell assured young people that they don’t need to cancel their retirements entirely. “In fact, my research shows that the vast majority of millennials will be fine if they work to age 70,” she wrote for Politico. (Small solace given that life expectancy for Americans recently took a turn for the worse.)

Still, Munnell has a point. Across a generational time-frame, people are still living much longer than their parents. As my colleague Peter Coy recently pointed out, a man who is “chronologically” 65 is actually more like a 55-year-old from the perspective of 1957. With the extra years, a longer career doesn’t necessarily mean a shorter retirement.

Retirement-age Americans are already working in record numbers. Whether by choice or necessity, because of boredom or fear, a full third of those between 65 and 69 were in the workforce in May, according to the Bureau of Labor Statistics, along with 19 per cent of those aged 70 to 74—together almost double the number 30 years ago.

A new CIBC poll suggests millennials' homeownership ambitions are difficult to reconcile with their financial realities. Ninety-four per cent of respondents who currently rent or live at home said they intend to buy a home, yet 67 per cent have yet to start saving. CTV’s Chief Financial Commentator Pattie Lovett-Reid has more on the survey.

Nevertheless, the retirement advice of “just work longer” can sound pretty tone deaf to younger ears, especially when the old American promises—of advancement, financial security and home ownership for everyone who works hard—have faded into myth.

What about the booming economy of 2018? Won’t that help smooth the path for young savers? Perhaps, but Goldman Sachs Group Inc. economists recently said the current pace of the U.S. economy is “probably as good as it gets.” That can only make young Americans more furious about the “missed opportunity” mentioned by the St. Louis Fed.

Paychecks aren’t reflecting the improving economy. Hourly wages were unchanged in May from a year earlier. And according to a Fed survey, four in 10 Americans said it would be tough to come up with $400 for an emergency expense. The same 2017 survey found 27 percent skipping medical treatments because they can’t afford them. Another poll this month reaffirmed the inability of many Americans to save any money at all.

So work longer? First you have to live longer, and that’s not guaranteed.

Wide swaths of the country are getting sicker and dying younger than just a few years ago, with a widening health gap between educated, affluent Americans and everyone else. Alcohol abuse and obesity, upticks in suicide and an epidemic of drug overdoses have all played a role in an ominous milestone: Year-over-year declines in American life expectancy while the rest of the world lives ever-longer.

Perhaps it’s a statistical blip. If not, the U.S. faces an almost dystopian future—one of hyper class-stratification in which the few are rich and living longer while the many postpone retirement, struggle to get by and ultimately die younger.

There is some good news for younger generations, though. As they focus on the hand they’ve been dealt, they will find there is one good card to play, one that may allow them to address the myriad problems they face: numbers.

It’s no secret the widening gap in financial security is shadowed by a similar gap in politics, setting up the potential for generational warfare at the ballot box in coming elections.

The outcome of the 2018 midterms may largely come down to whether left-leaning millennials and Gen-Xers, who make up a majority of eligible U.S. voters, show up. In recent elections, these two demographics voted at much lower rates than previous generations at the same ages, according to the Pew Research Center. Unless that changes, wealthier, right-leaning baby boomers and the remaining members of the so-called Silent Generation will once again swamp them at the polls.

Regardless of turnout, or even who wins, academics predict a growing animus between young and old to match the polarized party politics currently roiling the nation.

“I think you’re going to see growing conflict,” said Susan MacManus, an emeritus professor of political science at the University of South Florida. One sign that “this huge generation is awakening to things is that we have seen record levels of younger candidates stepping up to the plate and running for office at every level,” she said.

And she said these young people, just now realizing how bad their prospects are financially, are increasingly angry.