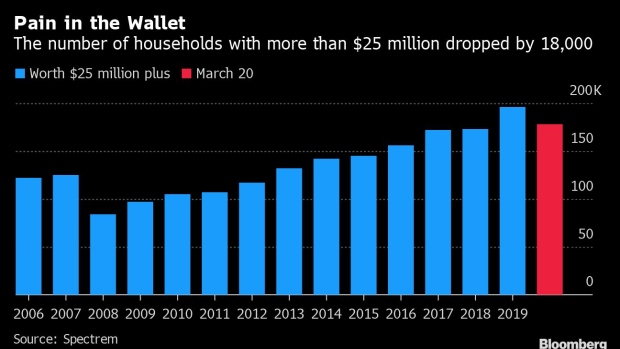 A MUNI bus stop sign displays an advertisement placed by the Center for Disease Control (CDC) reading "Slow the spread of COVID-19, stay home if you can" in San Francisco, California, U.S., on Friday, March 20, 2020. California Governor Gavin Newsom ordered that all of the states 40 million residents go into home isolation starting Thursday evening, marking the most stringent U.S. effort yet to stymie the spread of the novel coronavirus. Photographer: Michael Short/Bloomberg , Bloomberg

(Bloomberg) -- At the close of 2019, there were an unprecedented 11 million American millionaires, a reflection of the longest bull market in history thanks to ultra-low interest rates and tax cuts.

Fast forward just a few months and it’s a starkly different picture. The number of households in the U.S. above that threshold has dropped by at least 500,000 as of Friday, according to research firm Spectrem Group.

The tandem financial and health crises wrought by Covid-19 have disproportionately eroded the fortunes of the wealthy, who are more likely to own equities than the overall population. At the end of 2019, the top 1% of households owned 53.5% of equities and mutual fund shares, according to Federal Reserve statistics.

The losses affected the rich at every level, from the mass affluent to those worth more than $25 million, according to the report. The wealth destruction at the very top has been especially steep.

The world’s 500 richest people have lost almost $1.3 trillion since the start of the year, according to the Bloomberg Billionaires Index. That’s equivalent to a 21.6% decline in their collective net worth. Americans on the ranking, who currently number 180, have lost $433 billion.