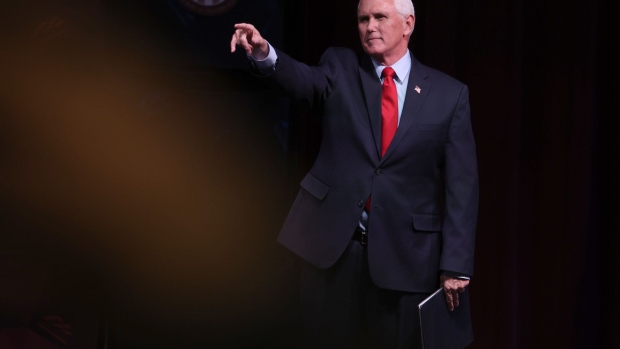 Vivek Ramaswamy has started a new investing firm that attempts to be an antidote to the “political agendas” and “stakeholder capitalism” of bigger money managers. Photographer: Tristan Wheelock/Bloomberg , Bloomberg

(Bloomberg) -- Heading into the hotly contested midterm elections, the American political right has a new rallying cry: Down with ESG.

Conservatives have identified the popular investing strategy, which accounts for environmental, social and governance risks, as part of a broader narrative about left-wing overreach and “ wokeness” run amok. Utah Treasurer Marlo Oaks calls it “corporate cancel culture.” Behind the rhetoric lie policies designed to sap the momentum of one of Wall Street’s most successful initiatives in recent years, now worth $35 trillion globally. If it works, it will firmly ensconce ESG in the culture wars, galvanize voters and weaken the resolve of big asset managers to act on climate change and other big, societal issues.

West Virginians are already all too familiar with ESG, according to state treasurer Riley Moore. He’s preparing a list of banks that, he says, will lose the state’s business unless they declare they aren’t boycotting the coal industry and other fossil fuels. “Certainly ‘woke capitalism’ is something they are very familiar with,” he said. “We’re facing threats from that in my state, right now.”

The attacks on ESG escalated last week when former Vice President Mike Pence made the strategy a key theme in an energy-policy speech in Houston. A potential candidate for the 2024 Republican presidential nomination, Pence said large investment firms are pushing a “radical ESG agenda” and took aim at BlackRock Inc., whose Chief Executive Officer Larry Fink is a champion of sustainable investing, and others who have pressed for progress on climate change.

Pence added to the growing public attacks on ESG. On Wednesday, Tesla Inc. founder and libertarian influencer Elon Musk told his 94 million Twitter followers that “ ESG is a scam,” building on a March tweet in which he labeled the practice “the Devil incarnate.” Republican megadonor Peter Thiel called ESG a “hate factory for naming enemies” in a speech at a Bitcoin conference in April, and the Twitter bio of right-wing pundit Glenn Beck now reads, “Against ESG before it was cool.”

With gas prices rising and energy a key factor in Russia’s invasion of Ukraine, it’s becoming easier for Republicans to tie ESG to pocketbook issues of their constituents. Just as Critical Race Theory grew from a catchall for parents unhappy or worried about what their children were learning in public schools to successful efforts to seize control of local school boards, ESG opponents see an opportunity to aim voters’ fears of inflation at the finance industry’s efforts to combat global warming and other social ills.

It’s also a new front in a longstanding battle against further restrictions on fossil-fuel industries, which give generously to Republican party candidates, and more corporate accountability. At the state level, Republican governors and other officials are finding new ways to block major Wall Street firms from state business, including managing pension funds and bond issues, if they apply ESG principles to other parts of their portfolios.

Nationally, the broadsides against ESG bolster calls to abandon, or at least relax, environmental standards in favor of “energy independence.” It’s also a partisan issue at the US Securities and Exchange Commission, which is trying to require companies to report on their greenhouse gas emissions. In a virtual meeting on the plan in March, the agency’s only Republican commissioner, Hester Peirce, turned off her camera in protest, saying that she was trying to reduce her carbon footprint.

Republicans are increasingly using banks and “woke” companies as cudgels for their base voters, said Reed Galen, a co-founder of the anti-Trump group, The Lincoln Project. “If you’re taking on a company who has environmental and social justice goals, you don't have to explain ESG to the voters. All you have to do is say ‘woke corporation.’”

In the past few years, as the world became more aware of the risks posed by global warming and social unrest, financial firms have rushed to offer investments that promise to account for those risks — and maybe even minimize them. With an ESG slant on everything from loans to complex derivatives, assets are set to balloon to $50 trillion worldwide by 2025, according to estimates from Bloomberg Intelligence.

In the US, a big proportion of that is via public pension funds, which are overseen by state or local officials, or in private sector retirement plans, and receive preferential tax treatment. In response to new federal rules that would allow pension funds to consider ESG alongside traditional fiduciary factors in making investing decisions, almost two dozen states registered their objection, saying the rules would allow investments to be guided by “social causes and corporate goals, even if it adversely affects the return to the employee.”

“The ESG movement is nothing but a slippery slope,” Moore said, cautioning that states will be forced to “bend the knee to the woke capitalists or suffer financial harm.”

S&P Global declined to comment on specific states and instead referred to a paper it published May 9 explaining how its ESG credit indicators work.

Kentucky, Texas and West Virginia have passed legislation that requires financial firms to say whether they have policies that limit doing business with oil, gas and coal companies, a common practice for firms that have made pledges to reduce their own carbon footprint. Banks that demur could lose their licenses in those states. Another 12 states are considering similar measures.

“Once ESG becomes commingled with corporate wokeness, it can become a powerful way for anti-corporate right wingers to talk about it and galvanize voters,’’ said Chris Stirewalt, an expert in US politics, voting trends and public opinion at free-market think tank American Enterprise Institute.

In addition to shunning oil, gas and coal producers as part of climate change policies, investors and employees have encouraged companies in recent years to take positions on LGBTQ rights, gun control and other issues that add to rancor among Republican voters.

Most recently, companies have begun to address the third rail of political issues: abortion. In March, Citigroup Inc. made waves when it said it would cover the travel and medical costs for any of its employees who needed to cross state lines to seek an abortion or other reproductive health care. In response, a Texas lawmaker said the bank could face criminal charges under that state’s abortion law, and Republican members of Congress called for the cancellation of US government contracts with Citigroup, which provides the credit cards that members of the US House of Representatives use to pay for flights, supplies and other goods.

Spokespeople for Citigroup and BlackRock declined to comment. A spokesman for Thiel didn't respond to messages, nor did representatives for Tesla, run by Musk.

Few expect the Republican attacks on ESG to vaporize the industry. As of now, roughly $3.4 trillion of public retirement money is invested in line with ESG strategies of some sort, according to the sustainable-investing industry group US SIF. Some of the bigger, more liberal states like California and New York are pushing for more restrictive ESG screens for state funds, not less. What’s more, many of the world’s biggest financial institutions have their own goals to cut emissions, which include reducing the amount of business they do with heavy polluters — whether they bill it as ESG or not. Many also have set targets for workforce diversity and elevating women in management, neither of which are politically popular among the right.

Still, the political pressure seems to be taking a toll. BlackRock sent a letter this week to the Texas state comptroller, rebutting the assertion that the firm boycotts the oil and gas industries, and Fink has made it clear he opposes divesting from fossil-fuel companies. The firm also said this year that it won’t back as many shareholder efforts to push companies to reduce their emissions compared with 2021. JPMorgan Chase & Co. is also taking steps to re-establish itself in Texas’s muni-bond market, about eight months after a new law forced that bank out of most deals because of its policies on guns and fossil fuels.

And if Wall Street’s usual suspects can’t be persuaded, others are eager to step in. With the backing of hedge fund manager Bill Ackman and Thiel, Vivek Ramaswamy, a pharmaceutical investor and author of “Woke Inc.,” has started an investing firm that attempts to be an antidote to the “political agendas” and “stakeholder capitalism” of bigger money managers.

In Utah, state treasurer Oaks pointed to real pain points for his constituency. Dixie Power, for example, which delivers power to roughly 25,000 customers, recently learned its longtime auto insurer wouldn’t renew coverage. The utility owns a coal-burning power plant and has stakes in two others, and the insurance company is phasing out business with companies that derive profits from coal, according to Colin Jack, the firm’s chief operating officer. The co-op is also set to lose insurance coverage for its coal mine from Lloyd’s of London for the same reason.

Fueled by frustration with that and what he sees as other government intrusion into the energy sector, Jack is running as a Republican for a seat in the Utah state legislature.

He may be in line for a powerful endorsement. On Wednesday, less than three hours after tweeting that ESG is a scam, Musk wrote that although he’d voted Democrat in the past, “I can no longer support them and will vote Republican.”