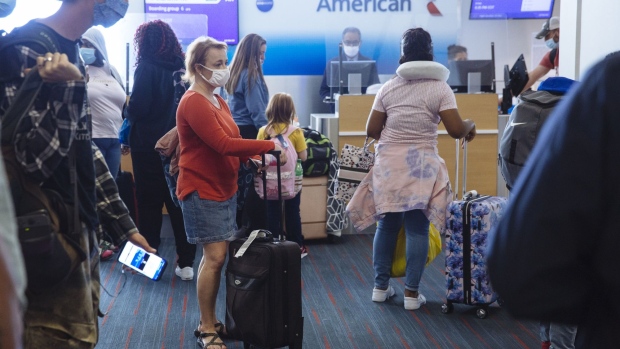 Travelers wearing protective masks wait to board an American Airlines fight at Dallas/Fort Worth International Airport (DFW) in Dallas, Texas, U.S., on Monday, Sept. 28, 2020. Airline passenger numbers in the U.S. totaled 797,699 on Sept. 28, compared with 2.37 million the same weekday a year earlier, according to the Transportation Security Administration. , Bloomberg

American Airlines Group Inc. joined the dash among U.S. carriers to offer preflight coronavirus testing to Jamaica and Hawaii that it hopes to eventually expand to other international markets.

The initial phase, starting next month, will involve Jamaican residents traveling to their home country through American’s hub at Miami, the carrier said in a statement Tuesday. A negative test would waive a 14-day quarantine requirement on arrival in the country. The program could be expanded later to all passengers traveling to Jamaica.

American also will offer tests between Dallas-Fort Worth International Airport and Hawaii as of Oct. 15. Further expansion could include the Bahamas and other Caribbean countries.

Airlines are hoping the testing programs will provide a way to kick-start demand for international flights. While domestic travel is down about 70% from 2019 levels, international business remains nearly nonexistent, in part because of quarantines imposed by some nations. The Fort Worth, Texas-based carrier follows United Airlines Holdings Inc. and Hawaiian Airlines, which last week announced pre-flight virus testing on trips to Hawaii from select cities.

Details of the Jamaica testing program weren’t immediately disclosed. For flights from Dallas-Fort Worth to Honolulu and Maui, American will partner with LetsGetChecked, a home-testing provider owned by PrivaPath Diagnostics that will provide results within 48 hours. In-person testing will be provided by CareNow, a unit of HCA Healthcare Inc. Travelers can visit a clinic location or get a rapid test at the airport.

American didn’t immediately provide the cost of testing, which must be completed within 72 hours of the final leg of flight. As in Jamaica, visitors to Hawaii can avoid a two-week quarantine with a negative test. The state’s self-isolation rule has been discouraging most travelers.