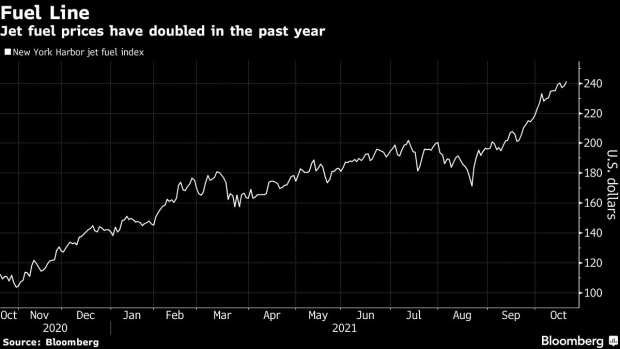 American Airlines Group Inc. aircraft at Ronald Reagan National Airport (DCA) in Arlington, Virginia, U.S., on Wednesday, Nov. 25, 2020. While passenger volumes are less than 40% of last year’s levels, late demand for holiday travel has been driven by fares that are substantially lower than typical as airlines desperately try to fill seats during the coronavirus pandemic. , Bloomberg

(Bloomberg) -- American Airlines Group Inc. posted a loss that was narrower than expected while warning that costs this quarter will continue to pinch earnings as revenue remains below pre-pandemic levels.

The carrier reported a third-quarter loss of $641 million, or 99 cents a share, while analysts expected a $1.03-a-share loss, based on the average of estimates compiled by Bloomberg. Revenue nearly tripled from a year earlier to $8.97 billion, while Wall Street projected $8.94 billion. The carrier released preliminary results for the quarter on Oct. 12.

American joined other carriers in warning about higher costs this quarter. It expects to pay as much as $2.48 a gallon for fuel, up from an average $2.07 in the third quarter.

Fuel costs vie with labor as the largest expenses for carriers, and persistently higher prices could help derail efforts by most U.S. airlines to return to profits while trying to recover from the collapse in travel during the coronavirus pandemic. American spent $1.95 billion on fuel and taxes in the third quarter.

American rose less than 1% to $19.66 before the start of regular trading in New York. The stock had climbed 24% this year through Wednesday, the biggest gain on the S&P 500 Airlines Index.