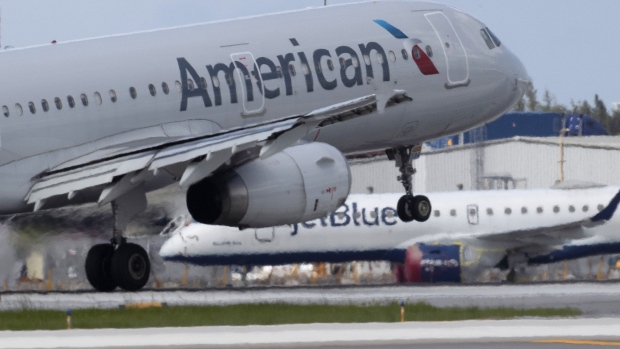 (Bloomberg) -- American Airlines Group Inc. credited Covid as a key reason it pursued a controversial business partnership with JetBlue Airways Corp., saying it needed the alliance to stay competitive in the heavily trafficked US Northeast.

“Our business was hemorrhaging cash” in the spring of 2020, American’s CEO Robert Isom testified Monday in a federal court in Boston, adding that the airline was losing more than $100 million a day as Covid-19 shut down air travel. Identifying the pandemic downturn as a “mortal threat” to American’s survival, Isom authorized executives to focus “fast and hard” on partnerships with JetBlue and Alaska Air Group Inc., to put his airline “in a stronger position when we came out than when we went in.”

American’s partnership with JetBlue, called the Northeast Alliance, allows the two airlines to share routes, bookings and passengers, particularly at airports in Boston and New York. The Justice Department has accused it of being “a merger in all but name,” and sued American and JetBlue last year. Prosecutors seek to unwind the partnership, which they claim reduces choice at US Northeast airports and costs passengers as much as $700 million annually in increased fares.

The alliance, which has been operational for about 18 months, lets passengers use either carrier’s website to book itineraries on both airlines and enjoy some reciprocal loyalty reward benefits. Offering corporate customers and frequent flyers a seamless reservation and travel experience “would absolutely help us maintain market presence in a downturn,” Isom said at the start of the trial’s second week.

William Jones II, an attorney for the Justice Department, asked Isom if the alliance was intended to “help American shed capacity.” The CEO replied it was merely to “help American,” and that the partnership offered it the opportunity “to expand or improve in an area where we’ve been historically weak.”

In his testimony on Monday, Isom defended the alliance as wholly different from a merger, pointing to the five years of extensive, expensive integration American undertook to merge with US Airways in 2013. After that merger, the two airlines had to convert to the same computer and reservations systems, negotiate agreements with employee unions, reconfigure aircraft, retrain some staff, and convert airport properties to one brand.

With the Northeast Alliance, he said, “we’re not trying to merge our carriers or make JetBlue identical to American.” When Jones asked if the two “operate as a single airline” in New York and Boston, Isom replied, “We have our own gates, our own planes, our own services that make us distinct.”

Isom said the airline’s goal was to encourage high-value travelers to book with the Northeast Alliance instead of with United Airlines Inc. or Delta Air Lines Inc., which have large presences in Northeast markets. “It’s not something that takes billions to bring about,” like a merger, he said. “There’s no comparison at all. They’re not on the same magnitude, not the same scale.”

The case is US v American Airlines, 21-cv-11558, US District Court of Massachusetts (Boston).