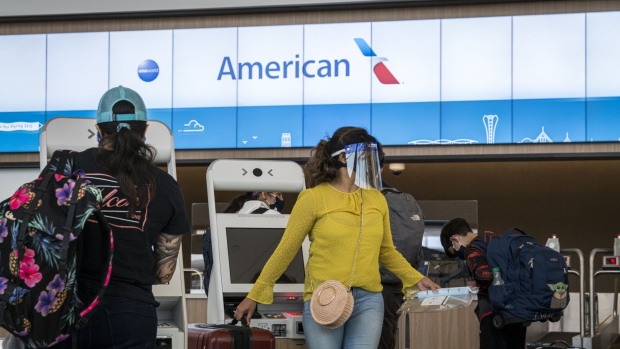 The deal includes a codeshare agreement that enables the two carriers to book travelers on each other’s flights and offer reciprocal loyalty program benefits.

Passengers will be able to use either company’s website to purchase a single itinerary that includes flights on both airlines, American and JetBlue said in a statement Thursday. The arrangement also covers Boston.

The agreement heralds a new face-off between American and Delta Air Lines Inc., which boasts a major presence in Boston and New York. American has ambitions to rebuild John F. Kennedy International into a major trans-Atlantic hub, fed in part by JetBlue’s popularity with domestic travelers.

JetBlue will secure a broader network, and the partners expect the deal to help speed recovery from the travel collapse caused by the coronavirus pandemic.

The alliance is “a confirmation that these airlines see a lot of excess capacity in domestic markets over the next few years,” said George Ferguson, a Bloomberg Intelligence analyst. “American could rationalize some capacity in the Northeast as JetBlue feeds its international business with lower-cost seats.”

The deal expands on recent moves by both airlines that seem to fly in the face of drastically reduced demand. American, which recently put 141 parked planes back into service, will add its first new international flights out of Kennedy since 2016 under the partnership. Even before the agreement with American, JetBlue was planning to add 30 new domestic routes concentrated in the New York area.

“By coming together, we can create a network that’s not just competitive with our larger rivals in New York, but eventually something greater,” Vasu Raja, American’s chief revenue officer, said in an interview.

The partnership doesn’t portend a merger between the two carriers, said Scott Laurence, JetBlue’s head of revenue and planning. With its valuable New York base, the company has been a perennial focus of merger speculation, with Fort Worth, Texas-based American seen as one of its potential suitors.

“It seems like a marriage of convenience as each manages through less demand over the next few years,” Ferguson said. “Once demand returns, I suspect this partnership won’t be as desirable.”

Talks between American and JetBlue on the codeshare pact began before the coronavirus outbreak, the airlines said.

“We’re passionate about our organic plan and what we can do with that,” Laurence said. “It’s the creativity of ideas like this that makes our organization so strong. By working with American, we can not only see a strategic advantage, but it moves us toward recovery from Covid at a faster rate.”

The codeshare agreement includes 489 daily flights and 120 nonstop destinations from the New York City area, the carriers said. American customers will gain access to 130 JetBlue routes, with more flights to the southeast U.S. from New York and Boston, plus additional service on the East and West Coasts. JetBlue customers can tap 60 American routes, including international options.

JetBlue operates domestic routes out of Kennedy, which serves as an international gateway for numerous carriers based in the U.S. and abroad. Through interline agreements, JetBlue ferries travelers across the U.S. to and from larger carriers.

The company still plans to begin flights to London in 2021 and won’t join the Oneworld airline alliance that American belongs to.

“JetBlue is what makes our growth possible,” in New York, Raja said. “We’re growing our mainline operations in New York, which we haven’t done in years.”

The agreement resembles American’s move earlier this year to establish Seattle as an international gateway for westward flights to India and other Asian destinations through a reinvigorated codeshare deal with Alaska Air Group Inc.

That pact also stoked American’s rivalry with Delta, which built Seattle into a hub by more than doubling departures between 2014 and 2019.

In New York, JetBlue held a 36 per cent passenger share at Kennedy for the 12 months ended in March, according to U.S. Transportation Department data. Delta, which began expanding in New York around 2011, was second at 34 per cent and American third at 13 per cent.

At LaGuardia airport, Delta and its wholly owned Endeavor regional unit held 34 per cent of passengers, followed by American with 19 per cent. United Airlines Holdings Inc.’s northeast hub is at nearby Newark Liberty International in New Jersey.

Delta also has been beefing up operations in Boston, where JetBlue has about a third of passengers. American has 18 per cent, followed by Delta with 16 per cent.

American scaled back its New York operations around the time its predecessor company, AMR Corp., sought bankruptcy protection in late 2011.

More recently, but before the coronavirus pandemic, American’s hub at Philadelphia had flights to 19 international long-haul destinations. American had eight such destinations at Charlotte, North Carolina, and six from Kennedy.