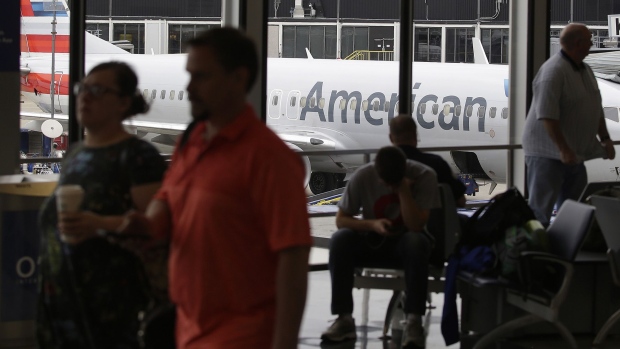 (Bloomberg) -- American Airlines Group Inc. wants to establish Seattle as an international gateway for westward flights to India and other locations, with help from a reinvigorated partnership with Alaska Air Group Inc.

Nonstop service will begin in October between Seattle and Bangalore, India, the most requested route by big corporate customers, the airlines said in a statement Thursday. American expects to add more flights to India and Asia from Seattle, complementing service to the South Pacific and Europe from the company’s hub in Los Angeles.

The plans will extend American’s expansion of international service, including its first flights to Morocco and Krakow, Poland, and new flights to New Zealand later this year. The initiative with Alaska Air fuels a rivalry with Delta Air Lines Inc., which built Seattle into a hub by more than doubling departures between 2014 and 2019.

“It makes a lot of sense for us to come together,” Vasu Raja, American’s senior vice president for network development, said in an interview. “Alaska supports American internationally, and American supports Alaska domestically.”

American will add flights to London’s Heathrow Airport from Seattle in March 2021.

As many as 15% of American’s passengers between Heathrow and Dallas-Fort Worth International travel to India via connecting flights, he said. American and Alaska will be able to link 100 U.S. cities to Bangalore via a stop in Seattle.

The two airlines will let passengers earn and redeem frequent-flyer miles on one another, a program that had been set to expire March 1. They also will restore a pared-down code-sharing program, which, pending regulatory review, allows the carriers to book passengers on each other’s domestic flights. The agreement will be expanded to international routes in the future.

Alaska also will join Fort Worth, Texas-based American in the Oneworld global alliance, which facilitates booking on partner airlines.

Alaska and its regional unit, Horizon Air, held about 52% of passenger traffic in Seattle for the 12 months through October 2019, according to the U.S. Transportation Department. Delta had 19% and Southwest Airlines Co. had 6.6%.

To contact the editors responsible for this story: Brendan Case at bcase4@bloomberg.net, Tony Robinson