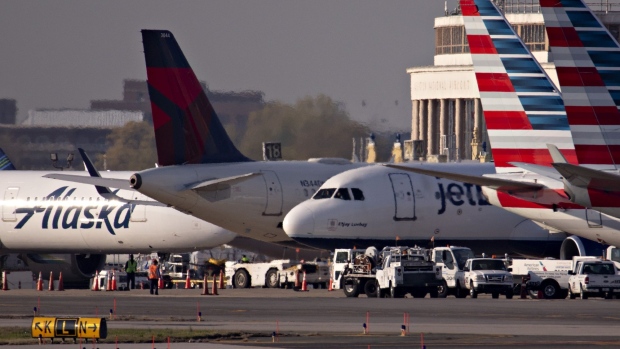 American Airlines Group Inc. has warned Boeing Co. it will cancel orders for about a dozen 737 Max jets if negotiations fail to secure additional help to finance the planes, said people familiar with the matter.

The discussions involve aircraft for which financing deals have expired because of delivery delays and a handful of other jets for which financial arrangements will end soon, said the people, who asked not to be named because the talks are private. Aircraft lessors also are involved in the talks, the people said. All the planes are scheduled for delivery to American this year.

A cancellation by American, one of the world’s biggest aircraft buyers, would deliver a painful blow to Boeing as the planemaker tries to end a grounding of the Max that began in March 2019 after two deadly crashes. The return of Boeing’s best-selling jet has been further complicated by the coronavirus pandemic, which has caused travel demand to collapse and battered demand for new aircraft.

American owns 24 Max aircraft that currently are grounded, and wants to retain its existing order for 76 more, the people said. The Fort Worth, Texas-based carrier declined to comment on the talks with Boeing, while the aerospace giant said it wouldn’t discuss conversations with its customers.

“It is an unprecedented time for our industry as airlines confront a steep drop in traffic,” Boeing said in a statement. “We continue to work closely with our customers to support their operations, while balancing supply and demand with the realities of the market.”

The discussions between American and Boeing were reported earlier by the Wall Street Journal.

Boeing said it’s focused on working with regulators around the globe to return the Max to commercial service. The Chicago-based manufacturer and the U.S. Federal Aviation Administration recently finished testing of the plane’s revised flight-control system, moving it one step closer to a possible comeback later this year.

Boeing logged 313 cancellations for the Max this year through May, buyers have said they would scrap additional orders since then. This week, lessor Avolon Holdings Ltd. said it would drop 27 planned Max purchases after canceling 75 in April.

Southwest Airlines Co. reached an agreement with BOC Aviation Ltd. in May to sell and lease back 10 of its Max aircraft and 10 older 737 models. The carrier said it expected net proceeds of US$815 million.