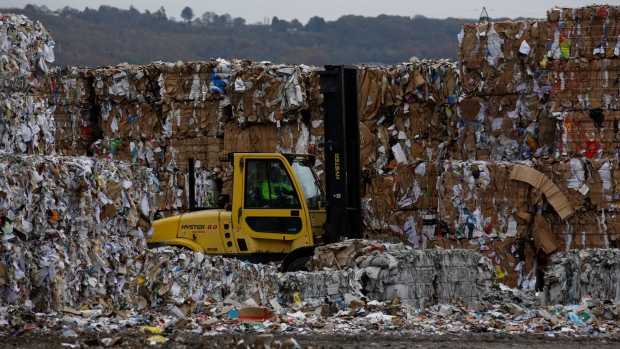 A forklift truck driver moves bales of recycled cardboard at a paper mill in the U.K. Photographer: Luke MacGregor/Bloomberg , Bloomberg

(Bloomberg) -- The epiphany came when a certain coffee chain started replacing plastic straws with paper ones. Despite increasingly dire warnings about Texas-size islands of plastic in the world’s oceans, the sudden public debate over straws was arguably a turning point in how American consumers think about sustainability.

On one hand, the rise of paper straws is a brazen case of greenwashing, since straws make up only a tiny share of waste. On the other, the proliferation of paper and bamboo straws marked the beginning of a larger commercial pivot away from plastic.

Companies are beginning to realize there’s more to lose from offending consumers who are aware of how cheap plastic products feed global warming, choke oceans, kill wildlife and—more slowly—threaten us. This is especially the case when it comes to packaging.

Containers, cartons, wrapping and everything else discarded after a product is used make up about 30% of all American trash, or more than 76 million tons annually. Now the biggest retailers and consumer goods giants are racing to replace everything from plastic envelopes to styrofoam meat trays with fiber-based iterations.

The U.S. paper recycling industry, it turns out, has suddenly found itself in demand—and maybe just in the nick of time.

Until 2018, recycling in America—from plastics to paper to assorted waste—was propped up by China’s willingness to purchase much of it, ostensibly for recycling and reuse by its domestic industries. Instead of returning to China empty, shipping containers were filled with refuse, bales of plastic bottles, cardboard and wastepaper. But when Beijing decided it didn’t want the world’s garbage anymore, slashing the amount it would take while requiring the rest to be near-pristine, the value of American recyclables plummeted.

With an excess supply and no one to sell it to, prices for recycled residential paper even touched negative territory. That means cities have to pay someone to take away the material they collect. The S&P 500 Paper Packaging Index has plummeted more than 25% since China started restricting trash.

For U.S. towns and cities, with their colorful recycling barrels and bins, what was at best a breakeven proposition suddenly became very expensive. Unable to sell recycling at a high enough price, they either had to raise taxes to pay for collection, dump it all into landfills or burn it. Many chose the latter options.

This has been “a challenging year” for municipalities that collect paper, said Renee Yardley, a senior vice president at recycling company Sustana Group.

But consumer goods companies might be starting to turn that around. Trying to get ahead of regulations in countries that ban or tax plastic packaging, some product manufacturers are turning to recycled paper for the first time. With restrictions on single-use plastics in place across 60 nations and 350 U.S. municipalities, analysts on MSCI’s environmental, social and governance research team said plastics “could lose market share to alternatives.”

More than 200 businesses, representing about 20% of all packaging used globally, have made commitments to reduce plastic waste, according to the Ellen MacArthur Foundation. Coca-Cola European Partners became the latest to do so, saying it will replace plastic shrink wrap with cardboard for its can multipacks across Western Europe, removing about 4,000 tons of plastic annually.

A ton of recycled paper saves the equivalent of 17 trees, more than 16,000 gallons of water and 5,500 pounds of carbon dioxide, according to Sustana. Americans are also more likely to recycle paper; collection rates for paper are above 60%, compared with 30% for common types of plastic. But it’s expensive to recycle paper: The process begins with fleets of trucks to pick it up and facilities to clean it, pulp it and eventually turn it into rolls of recycled paper. Then it’s sold to manufacturers for use in their products or packaging.

As demand for paper packaging rises, however, the U.S. recycling sector faces another challenge: a critical need for expanded infrastructure. Moreover, while the low price of discarded paper makes it cheaper for consumer companies to use it in their products, it’s also attracting the attention of European recycling executives. One is Miles Smith, chief executive officer of DS Smith, Europe’s largest cardboard-packaging recycler. He’s betting big on the U.S.

This summer, DS Smith opened a $100 million paper packaging and recycling plant in Indiana that’s set to become one of the largest in North America, with a team of 160 employees. Smith said a key draw of the American market is that the price of recycled paper has become competitive with that of paper made directly from trees.

“It just takes a few years to get the investment in infrastructure going,” Smith said. “We’re really just at the start.”

London-based DS Smith’s customers include consumer giants such as Mondelez, Nestle, P&G, Danone and Unilever. They have been pushing the company to create the same types of cardboard packaging in the U.S. for their products. (Think TV dinner trays made from paper and paper alternatives to plastic bubble wrap.)

Over the past year, Austrian packaging company Mondi Ltd. rolled out paper-based packaging for everything from deli cheese and premium watermelons to wine glasses. The company notes, though, that plastic packaging will still be needed in the medical and food industries, where other materials would be unsafe or impractical. Indeed, Mondi’s more deliberate approach is more likely to be the rule than the exception; the company said its strategy is to use “paper where possible, plastic when useful.”

It bears noting that some recycled paper products aren’t as biodegradable as advertised: Some are coated in plastic or contain chemicals. Still, the demand for recycled paper products in America is rising, according to Pat Lindner. The new president of Atlanta-based consumer packaging at WestRock Co., he contends that “retailers are now saying, ‘We need solutions for this, and we need it now.’”

Lindner joined the company in March, taking over a $20 billion business after spending two decades in, ironically, the plastics industry. WestRock has gone from working on a handful of new packaging projects to working on hundreds in the past year, he said. It’s replaced plastic wrapping for beer cans with printable paper labels suitable for advertising, and it is substituting paper for plastic lipstick and deodorant containers, as well as envelopes, e-commerce packaging and the dreaded styrofoam meat tray.

That last item has been reborn in a new pressed-fiber version that’s fully compostable.

Ecologic, which makes molded paper bottles out of old corrugated cardboard boxes, said it’s seeing growing demand as well. (cut also since we don't need also and as well) The Manteca, Calif.-based company said it’s sold 10 million paper bottles since it opened in 2011, but expects to sell as many as 6 million next year alone.

“We’re a little bit more expensive than plastic, but there’s a desperation right now at so many levels to start looking at alternatives,” said founder Julie Corbett. The company sells paper bottles for use with laundry detergent sold under Unilever’s Seventh Generation brand, and the Seed personal care line made by L’Oreal.

To compete with plastic on price, Ecologic has been automating every step of its manufacturing process, and collecting cardboard waste from L’Oreal’s distribution center in Los Angeles for reuse in its bottles. Corbett said she expects demand for paper packaging to grow as consumer product giants shift household products back to powders that save water and can be sold in boxes. The pricing gap between plastic and paper bottles should close as they scale up production, she said. “The packaging industry has for years focused on cheaper, faster and less, but it’s utterly disconnected from the consumer,” Corbett said. “Paper isn’t complicated; that’s why it’s so beautiful. It dissolves.”

Still, to be recycled, wastepaper needs to be clean. Pizza boxes stained with grease, for example, won’t cut it. Until recently, neither would paper products coated in plastic. WestRock has been trying to change this, Lindner said, making changes in its recycling facilities so its machines can process paper products such as coffee cups that come with coatings.

“Sometimes a paper solution is going to be more expensive,” Lindner, said, but brands don’t seem to mind, given that more consumers are demanding environmentally sensitive substitutes for plastic.

In Europe, paper can “close the loop” in just 14 days, going from one product into another. European cardboard is typically 30% to 40% lighter than that made in the U.S., and uses significantly less virgin material, Miles Smith said. As DS Smith’s Indiana plant begins operations, he noted that lighter boxes are a big attraction for U.S. companies, especially since it can reduce shipping costs.

Yardley of Sustana agreed that active demand from U.S. consumer companies is helping prop up the recycling industry. “Customers are coming to us and making us think about it differently,” she said.

Sustana has worked with Starbucks to test out how it could make coffee cups from recycled coffee cups while making its recycled paper pulp compliant with U.S. Food and Drug Administration food-safety rules. The goal, she said, is to make more recycled packaging and containers that can be used with food, without the need for a barrier or coating.

Smith said his company aims to use techniques refined in Europe to replace plastic with fully recyclable material. “The U.S. is a massive, growing and fast-moving market for paper fiber,” he said.