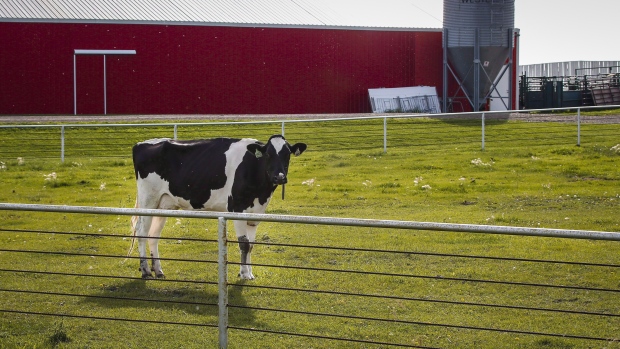 A free-market think-tank suggests offering American negotiators in upcoming NAFTA talks more open trade in dairy, in exchange for more predictable trade in softwood lumber to secure long-term peace in that perennially problematic file. A Holstein cow stands in a pasture at a dairy farm near Calgary in an August 31, 2016, file photo. , THE CANADIAN PRESS/Jeff McIntos

WASHINGTON -- The American dairy industry is split on the question of Canada's supply-management system as national negotiators get set to hold their first session on agriculture Saturday in North American free trade talks.

They don't want to eliminate Canada's system. They want to emulate it.

At least five organizations have expressed support for creating such a system in the U.S. Some have written letters to the official leading the U.S. trade team, urging Robert Lighthizer to leave the Canadian system alone.

That puts them at odds with the main national milk lobby, which is tied to export-based producers.

It's also at odds with the U.S. government position, which opposes Canadian supply management and has worked for years to weaken it.

"I would hate to go after a program that's protecting farmers, when that's really what farmers in the U.S. are asking," said Darin Von Ruden, who has a 50-cattle, multi-generational farm and heads the Wisconsin Farmers Union.

"Canada's supply-management program might not be perfect. But it certainly is doing a good enough job to make sure that those farmers, especially on the dairy side in Canada, can continue to stay in business and hand that farm on to the next generation."

Canada's system is highly controlled. It limits imports, and sets fixed prices. The system protects dairy operations from bankruptcy, but it draws deep criticism for a series of other alleged shortcomings: higher milk prices, fewer options at the grocery store, a less innovative industry, and the isolation of Canada from the international market, preventing it from becoming a global player.

But the Canadian government counters that every country supports its agriculture sector in some way. In the U.S., that includes federal income-assistance programs when farms face economic catastrophe.

In addition, the U.S. has its own supply-management system for sugar. That's why the Canadian sugar lobby is in Washington, pushing for more liberalized trade that would allow additional access to the U.S. market for Alberta beet-sugar and sugar-related products.

Even in Wisconsin, when dozens of farms nearly collapsed this spring in an incident given national attention by President Donald Trump, a decades-old state office that helps struggling farmers worked around the clock to find new buyers.

He said it's different from other industries because it's uniquely vulnerable to market shifts and when there's over-supply, and customers disappear, excess stock can't be left on the shelf while searching for new customers: "If you're talking hammers and screwdrivers, those are not products that (spoil). Soybeans and corn and even beef products -- they have a shelf life. If you don't do something with milk in a couple of days, it spoils."

His group isn't the only one calling for supply management in the U.S. Three organizations even wrote letters to Lighthizer in their public submissions for the NAFTA negotiations, backing the Canadian position.

In one letter, the National Family Farm Coalition and Institute for Agricultural & Trade Policy told Lighthizer: "Do not pressure Canada to weaken its dairy supply management program. Undermining Canadian supply management will not bring a large increase in U.S. dairy exports. Supply management helps ensure that dairy prices are high enough to cover the cost of milk production and keep Canadian family dairy farmers in business."

The National Farmers Union wrote another letter that said: "Canada's pricing system on dairy has received substantial criticism from national dairy organizations and the Administration ... The U.S. should support other nations' sovereignty. In other words, the U.S. should not work to undermine a system that benefits family farmers on either side of the border."

Trump withdrew the U.S. from the TPP and the Canadian position entering NAFTA talks is that the TPP offer, much like old milk, is expired. The 3.25 per cent was offered as a concession in exchange for a massive trade deal that offered access to the markets of Japan, Australia and several rising economies.

The main U.S. milk lobby says it can't see why its industry is shielded from free trade.

"We'd love to see an outcome that moves dairy to where all the rest of agriculture is. We're the oddballs here, us and poultry I suppose," said Shawna Morris of the National Milk Producers Federation.

"We're very, very keen to finish up undone business (from the original NAFTA) in terms of market access. Dairy is one of the few sectors that was not liberalized under that pretty old agreement."

Loosening supply management isn't the only U.S. priority on dairy. Another involves the way Canadian milk products are classified, to allow certain skimmed-off products to be sold at cheaper prices, for use in cheese-making.