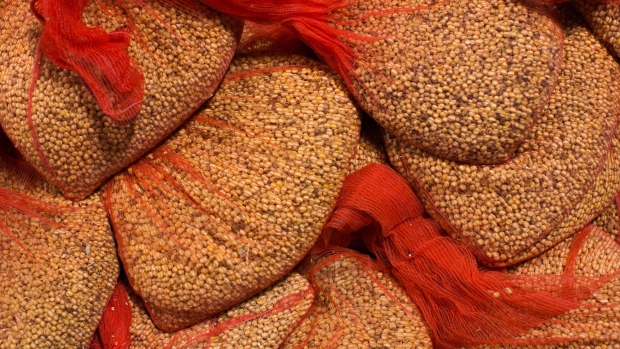 Bags of soybeans sit in metal crates at the Bay Farm Research Facility in Columbia, Missouri, U.S., on Thursday, July 19, 2018. Grain prices have been enjoying a rebound in the last several weeks, but the good times may not last for all crops as the U.S. Department of Agriculture's monthly World Agricultural Supply and Demand Estimates (WASDE) report Friday is projected to show near-record American harvests. Photographer: Alex FLynn/Bloomberg , Bloomberg

(Bloomberg) -- American soybean exporters sold several cargoes to Chinese state-run buyers, according to people familiar with the matter, showing that some transactions are still going through even after officials in Beijing ordered a pause in some purchases.

Shippers sold as many as four cargoes of U.S. soybeans from the new crop, said the people, who asked not to be named because the information is private. State-run stockpiler Sinograin was bidding earlier for Pacific Northwest cargoes, the people said.

The ministry of commerce did not immediately respond to a fax seeking comment. Officials from Sinograin and Cofco also didn’t respond to calls.

There are some exceptions to the order that state-run buyers Cofco and Sinograin halt American soy purchases, one of the people said. One exception is when state-buyers import on behalf of private firms, who are not affected by the halt, the person said. Another is when the state-buyers need the beans to cover their derivative positions, and a third exception is if there are already ongoing transactions, the person said.