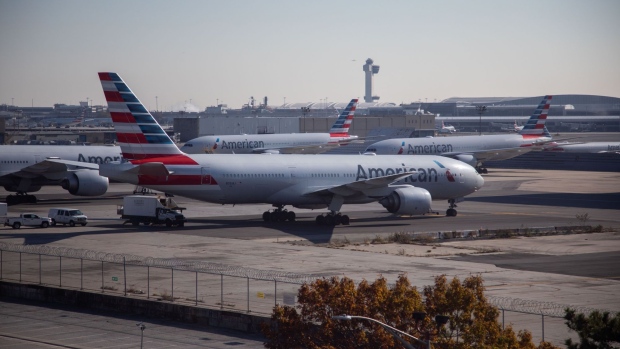 American Airlines airplanes parked at John F. Kennedy International Airport (JFK) ahead of the Thanksgiving holiday in New York, US, on Wednesday, Nov. 23, 2022. Planes and airports are expected to be bustling this Thanksgiving, traditionally one of the most traveled holidays of the year. , Bloomberg

(Bloomberg) -- American Airlines Group Inc. and JetBlue Airways Corp. plan to expand domestic and short-haul international flying next year under a partnership that US antitrust officials are seeking to dissolve.

The expansion to 10 new cities, if it goes through as planned, will bring the carriers’ Northeast Alliance to 500 daily departures across New York’s three major airports, and to 200 daily flights out of Boston, the airlines said Friday.

The carriers argued in a federal trial last month that their alliance gives consumers more options for flights and boosts competition, challenging assertions by US attorneys that the arrangement is a virtual merger that could cost consumers more than $700 million annually by way of higher fares. The parties are awaiting a ruling by US District Judge Leo T. Sorokin.

“We’re committed to continue to deliver significant consumer benefits and increase competition, as we have since our partnership was announced,” an American spokeswoman said.

The expansion will include new flights by JetBlue, with nonstop service from LaGuardia to Nassau, Bahamas, and Bermuda, pending government approval, as well as flights to Hyannis, Massachusetts, and Atlanta. American is dropping LaGuardia-Atlanta service, according to the carrier.

JetBlue will also bring back flights between Newark and Montego Bay, Jamaica, and expand service between Boston and Vancouver.

American plans add flights from LaGuardia to six new US cities. Limits at that airport mean carriers have to reduce flying on some routes or drop them altogether before adding new ones.

The new cities will bring capacity under the alliance back to peak levels reached this past summer. The flights began in 2021 under the partnership, which was challenged by the US Justice Department seven months later.

Sorokin has said he plans one more hearing in the case after he has considered all the evidence and legal filings. The judge hasn’t indicated when he will issue a ruling.