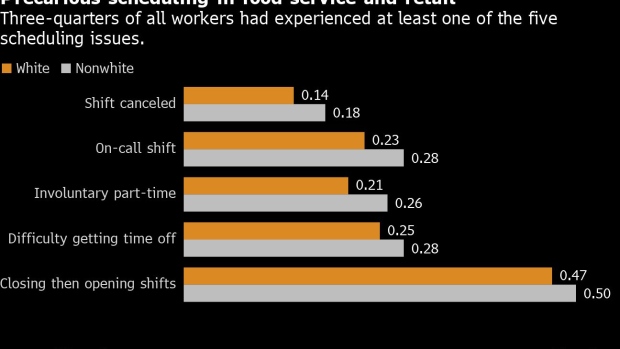 (Bloomberg) -- For hourly workers, time is literally money. But how that time is doled out can be far from equal.

White workers in U.S. retail and food-service industries are more likely to get regular shift work than other employees, according to a recent  study published in the American Sociological Review. They are less likely to have “on-call” shifts where work is uncertain, made involuntary part-timers due to a lack of shifts, have difficulty getting time off, have their shifts canceled or work back-to-back closing and opening shifts.

“What we find is that, pretty much across the board, White people have better schedules than workers of color,” said Adam Storer, a Ph.D. candidate at the University of California, Berkeley, and an author of the study.

Three-quarters of all respondents in a survey of more than 30,000 Americans said they had experienced one of the scheduling issues, according to Storer. But there were statistically significant gaps between White and nonwhite workers across all measures, and so-called precarious scheduling was worse for women than men.

The proliferation of “just-in-time” scheduling has long burdened America’s retail and service employees, where companies maintain workplace flexibility while workers (many paid minimum wage without benefits) wait for a call or text. Unable to take on additional jobs since schedules must remain open, “on-call” work often lead to underemployment.

Such unpredictable work schedules have been shown to create work-life conflict and otherwise negatively affect the lives of hourly employees.

“What we can see from other research is that this is just a very harmful...constellation of scheduling practices, for workers—for their sleep, for their health, for being able to put together childcare, and of course for their earnings,” said Susan Lambert, a professor at the University of Chicago who wasn’t involved in the study. She previously created a snapshot of young workers’ experiences with these types of scheduling practices.

The combination of “just-in-time” scheduling and racial disparities in employment outcomes are connected with racial differences in wealth, said Jhacova Williams, an economist at the think tank Economic Policy Institute not involved in the study.

“If you’re not working the amount of hours that you need to work, that means that you have low wages,” Williams said. “So how do you build wealth if you have lower wages?”

Storer said having a manager of a different race—which nonwhite workers are more than three-times as likely to have—is a significant factor when it comes to being granted time off and avoiding canceled shifts.

The study also found older workers were less exposed to precarious scheduling practices, and workers who had been employed by a company longer reported getting more shifts, and thus less likely to be made involuntarily part-time.

The new study, which is part of the Shift Project, uses Facebook and Instagram ads to target employees at specific food service and retail companies. As a result, the project’s survey doesn’t follow traditional probability sampling. About 1.1% of the people who see the ad take the survey, with an average sample of responses from about 261 people per company in the study’s 32,056-response sample.

“We don’t tolerate discrimination in the workplace, and we work hard to create an inclusive environment for everyone—in our hiring practices, associate career growth, and our day-to-day operations,” Sara Gorman, a spokesperson for Home Depot, wrote in an email. The other seven companies didn’t return requests seeking comment.