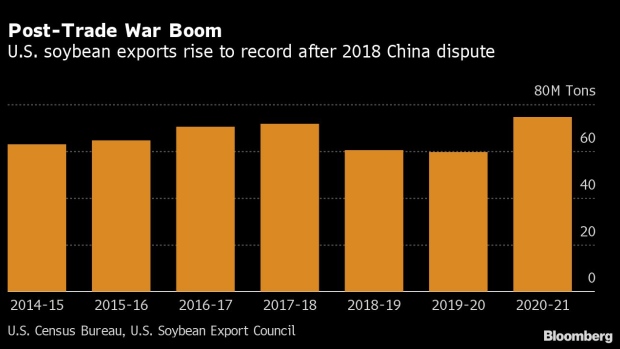 (Bloomberg) -- American soybean farmers who were hurt three years ago by then-President Trump’s trade war with China, which is the world’s biggest buyer, are finally reaping the benefits.

Overseas shipments of soybeans and soy-based products during the just-completed 2020-21 season reached an all-time high of 74.76 million metric tons, according to an industry analysis of U.S. Census Bureau data.

U.S. soy exporters were forced to find new customers during the trade war, and now some of those countries including Egypt, Mexico and Pakistan are boosting purchases. In addition to whole soybeans, they’ve bought more soybean meal and oil, which are used for animal feed and cooking, respectively. Meanwhile, shipments to China, which typically imports roughly two-thirds of global exports, also recovered.

The diversified destinations should benefit farmers in the event of other trade disruptions. Sales to Egypt, for example, more than doubled from before the trade war to the present.

“An opportunity came about when that happened,” Monte Peterson, chairman of the U.S. Soybean Export Council and a grower from North Dakota, said of the trade war. “It allowed other countries to step in and take a look at U.S. soy without the overwhelming competition of China.”

U.S. farmers continue to target countries with large populations, growing demand for protein and expanding economies, according to the export council.