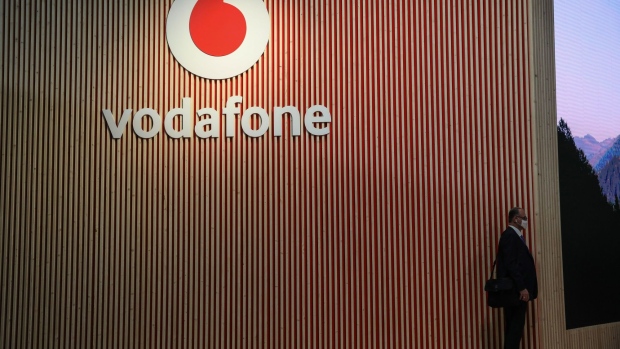 An attendee by the Vodafone Group Plc stand on the opening day of the MWC Barcelona at the Fira de Barcelona venue in Barcelona, Spain, on Monday, Feb. 28, 2022. Over 1,800 exhibitors and attendees from 183 countries will attend the annual event, which runs from Feb. 28 to March 3. Photographer: Angel Garcia/Bloomberg , Bloomberg

The US telecommunication infrastructure operator is exploring a possible investment in Frankfurt-listed Vantage Towers AG, the people said, asking not to be identified discussing confidential information.

Vodafone plans to sell part of its roughly 82% interest in Vantage and has invited suitors to participate in an auction process. Private equity firms KKR & Co., Global Infrastructure Partners and EQT AB are already in the running, Bloomberg News reported last month. Spain’s Cellnex Telecom SA has also studied the feasibility of an offer, the people said.

Deliberations are ongoing and there’s no certainty that American Tower or Cellnex will decide to bid. Some of the interested parties may decide to form consortiums and other suitors could also emerge, according to the people. Vodafone expects bids to be made as soon as next week and may announce a new partner for Vantage next month, they said.

American Tower fell 3.5% to close at $194.63 in New York trading Friday, giving the company a market value of about $91 billion.

Europe’s phone carriers have started to sell off infrastructure assets to raise money for investments in costly fiber-optic rollouts and wireless network upgrades, as well as to cut their large debt piles. In July, Deutsche Telekom AG agreed to sell a majority stake in its towers unit to Brookfield Asset Management Inc. and DigitalBridge Group Inc. in a deal valuing the business at €17.5 billion. Cellnex was also bidding for the asset before dropping out.

These assets, which carriers once saw as vital to their business models, are attractive to investment firms thanks to their steady, predictable returns.