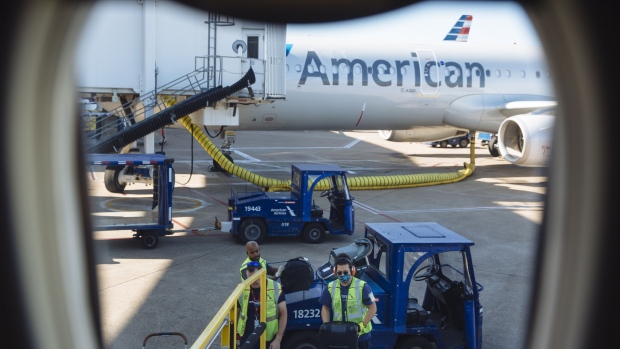 American Airlines Group Inc. and United Airlines Holdings Inc. will start laying off thousands of employees as originally scheduled, spurning an appeal from Treasury Secretary Steven Mnuchin as he negotiates with Congress about extending payroll support for U.S. carriers.

Both airlines vowed to reverse the furloughs if the government agrees to provide additional aid in the next few days, according to memos to workers issued late Wednesday by the carriers. American is furloughing 19,000, while United is laying off about 13,000.

The decision to move ahead with job cuts ramps up the pressure on Mnuchin and House Speaker Nancy Pelosi as they haggle over a US$2.2 trillion economic relief bill backed by Democrats. That includes $25 billion in payroll aid for airlines, which are contending with an unprecedented collapse in travel demand caused by the coronavirus pandemic.

“I am extremely sorry we have reached this outcome,” American Airlines Chief Executive Officer Doug Parker said in a letter to employees. “It is not what you all deserve.”

The Treasury secretary urged airlines earlier Wednesday to delay layoffs that were set to begin when a previous round of payroll aid of $25 billion expired at the end of the day. House leaders postponed a vote on the stimulus plan to give Pelosi more time to hammer out a compromise with Mnuchin.

United said it had made clear to the Trump administration, Congress and labor unions that it “can and will reverse the furlough process” if additional aid is extended. But the outcome is uncertain.

The layoffs add to job losses that already total 150,000 at the nation’s four largest carriers based on employees who have left voluntarily or taken temporary leave. Airlines have already reduced executive pay, pared schedules and grounded planes as domestic demand languishes at about 30 per cent of year-ago levels. International travel remains well below that.

Even with lower spending, the industry is losing billions monthly as costs outpace revenue, and carriers have said they will be smaller for several years.

Parker said earlier Wednesday that he was encouraged by the progress of negotiations and would be open to delaying furloughs -- but only if a political deal was on the verge of getting done.

“Certainly if there’s a clear and concrete path that says ‘We’re not done yet, but will be soon,’ of course,” Parker said in an interview with CNN. “If it’s a situation where ‘We need much more time to work and it’s unclear whether we can get something done or not,’ that’s going to be much harder.”

Delta Air Lines Inc. will avoid most layoffs until at least next summer after 17,000 workers left voluntarily and 40,000 took unpaid leaves. It remains in talks with its pilots union about ways to reduce or eliminate about 2,000 furloughs. Southwest Airlines Co. also has said it won’t lay off workers through the end of 2020 after 28% of its workforce agreed to leave permanently or temporarily.

A Standard & Poor’s index of major U.S. carriers has fallen 47 per cent this year, with declines led by United and American. The S&P 500 Index has advanced 4.1 per cent.