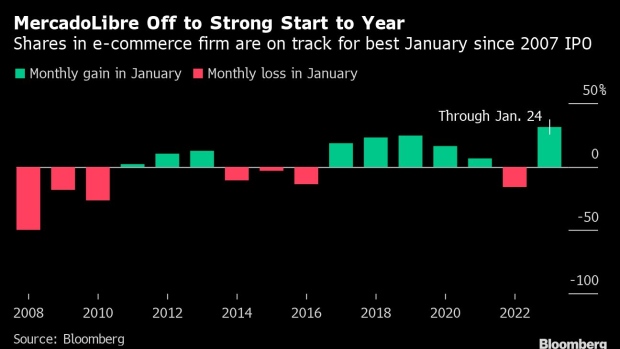 (Bloomberg) -- The meltdown at Brazilian retailer Americanas SA is proving a boon to MercadoLibre Inc.’s stock price, which is poised for its best January since the company went public in 2007.

Shares of the Buenos Aires-based e-commerce retailer and fintech provider are up roughly 31% this year on optimism that the company will gain market share after its Brazilian rival filed for bankruptcy protection amid debts of 43 billion reais ($8.4 billion).

“We see a potential opportunity for share gains,” Sgarz wrote in a note dated Jan. 23.

The stock is also getting a boost from investors pricing in the end of the US interest-rate hiking cycle and beginning to factor in a potential political change in Argentina — the company’s second largest market, which has presidential elections in 2023, according to Malcolm Dorson, a portfolio manager at Mirae Asset Global Investments in New York.

“Emerging-market stocks are catching a big bid, and this is a market favorite,” said Dorson, who has been holding MercadoLibre shares since 2019. “I expect earnings momentum to continue.”

MercadoLibre was already gaining market share in Brazil before the troubles at Americanas, as the company starts to see benefits from years of heavy investments to develop its logistics network. For example, it was able to grow its Black Friday sales last year while most peers retreated.

The company’s net revenue is expected to hit a record $3 billion in the fourth quarter, up from $2.7 billion in the third quarter, according to Bloomberg’s consensus estimate. Gross merchandise volume and total payment volume should come in at $9.4 billion and $35.6 billion, respectively.

“When you look at global e-commerce, very few players have created an ecosystem with the breadth and quality that MELI has created,” said Ignacio Arnau, a Madrid-based fund manager at Bestinver Asset Management, who has MercadoLibre as his fund’s biggest holding. “In Brazil they keep distancing themselves from the pack — and the whole Americanas debacle should help them accelerate their growth and maintain their leading position.”