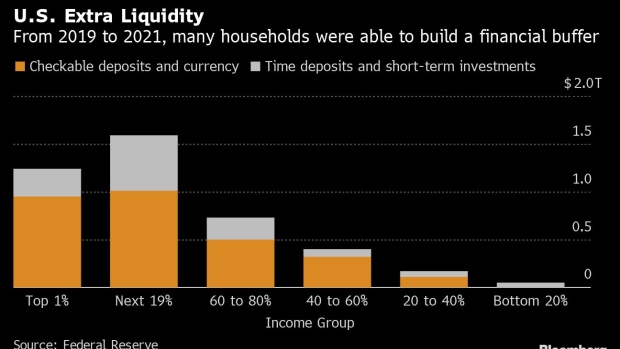 (Bloomberg) -- American households had an extra $4.2 trillion of readily available cash at the end of last year compared with before the pandemic, after they received more government support and trimmed spending due to Covid curbs, according to the latest Federal Reserve data.

The windfall is piling up at the top of the income distribution. About two-thirds of the excess savings were accumulated by the highest 20% of earners, with $1.2 trillion of it held by the top 1%.

The bottom 20% now have less money available as cash or in checking accounts than they did at the end of 2019: the figure peaked in the third quarter of 2020 and is down some $12.4 billion since then. Still, those 26 million households do have an additional $51 billion parked in short-term investments such as savings accounts and certificates of deposit.

The extra pandemic savings have spurred a debate among economists, with some saying that all the additional liquidity and spending power is one reason why inflation has spiked over recent months. Others argue that strong household balance-sheets are leaving the economy well placed to keep growing in the coming quarters, ensuring a better recovery than the one that followed the 2008 crash.