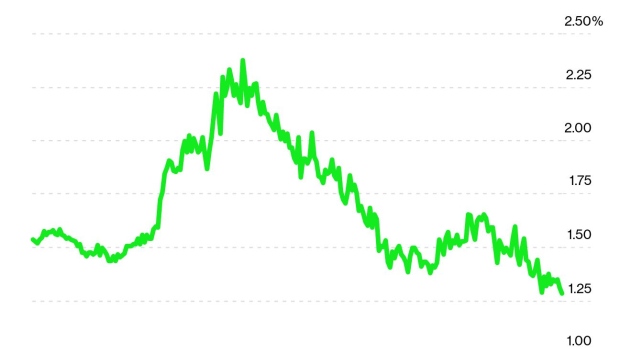 Last week my BloombergNEF colleagues and the Business Council for Sustainable Energy published their annual Sustainable Energy in America Factbook, a wealth of data on the trends shaping the world’s second-biggest energy system. One figure, which captures how much Americans spend on electricity, is at an all-time low. Today electricity represents just a little more more than 1% of Americans’ total outlay on goods and services, down from about twice that much in the early 1980s.

There are several ways to look at this data. The first is straightforward: we don’t spend much on electricity. The second is slightly less straightforward: Americans have added other things to their personal consumption basket (such as mobile phones and services, for instance) since the 1990s that might diminish the impact of electricity spending. The third is that incomes have risen, and if electricity expenditures have risen less than incomes, electricity spending will decrease in relative terms.

Something equally interesting is happening to the system that’s supplying that electricity, which is growing despite the spending trend. When U.S. electric utilities add to their transmission and distribution infrastructure, they ask their state regulators for an agreed-upon return on equity for those assets. It’s part and parcel of their natural monopoly status: In exchange for providing service to all in their territory, utilities receive assurance from the state that their investment in the equipment to provide that service will be worth it.

The Edison Electric Institute tracks both the ROE that utilities ask for, and the ROE that regulators award them, on a quarterly basis. Not surprisingly, utilities almost always ask for more than they receive—but both requested and awarded returns on equity have been declining for the past three decades.

At the same time, it seems like regulators and the regulated are getting better at bidding and asking, so to speak: Utility requests are not only lower than they were years ago, they’re more closely aligned with what regulators are willing to approve. In the mid-1990s and the early 2000s, the average spread between the ROE utilities asked for and what they were awarded occasionally spiked above 2%. Since 2010, it’s been about half that much, and sometimes much lower.

But—and it’s a big but—a utility return on equity doesn’t exist in a financial vacuum. EEI compares utilities’ awarded return on equity to a risk-free rate (in this case, 10-year U.S. Treasuries), and finds that even while utility-requested ROE is declining and the spread between what utilities ask for and regulators approve is tightening, the spread over the risk-free rate is near all-time highs. In 1990, utility-awarded ROE was barely above 400 basis points; right now, it’s touching 800 basis points.

The question, to me, is how low can personal consumption on electricity go? A significant deployment of distributed solar (which can drop a homeowner’s monthly bill to less than zero) could certainly drop expenditures lower. An increase in energy efficiency, meaning that consumers get the same comfort and service while demanding fewer electrons, would do the same. However a significant roll-out of electric vehicles could increase electricity consumption while offsetting expenditures on gasoline. A significant electrification of home heating could do the same, and offset expenditures on natural gas or heating oil. Perhaps, with spending on electricity so relatively low, American consumers would be more inclined to increase their electricity consumption (or perhaps not really notice it if it does increase).

For utilities, it’s exactly the opposite question. Chief financial officers can look at the spread I’ve charted above and rightly ask whether their risk-adjusted return on equity will continue to head back up to its all-time peak in 2011—or if it’ll stay in the post-2010 range, which is still 50% higher than three decades ago. Regardless, utilities have ample reason to build the wires to deliver electrons even to more efficient, solar-powered households, as each new connection and each new upgrade is more capital equipment on which to earn a return.

Nathaniel Bullard is a BloombergNEF analyst who writes the Sparklines newsletter about the global transition to renewable energy.

To contact the author of this story: Nathaniel Bullard in Washington at nbullard@bloomberg.net

To contact the editor responsible for this story: Jillian Goodman at jgoodman74@bloomberg.net