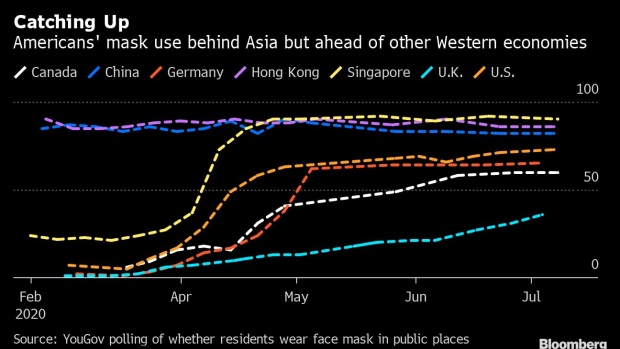 (Bloomberg) -- The aversion of many Americans to wearing a thin piece of cloth across their faces is restraining an already-shaky economic rebound.

In Texas, the second most-populous state and a hotspot of the resurgent Covid-19, Republican Governor Greg Abbott on July 2 ordered mask-wearing in a reversal of his earlier opposition to enforcement. He said on local television this week that face coverings will prevent “having our economy shut down again.”

Yet millions of Americans -- especially Republicans -- have been reluctant to embrace masks, with President Donald Trump himself resistant. That’s in contrast with Democratic opponent Joe Biden, who typically dons a black covering in public appearances. Gallup polling in late June showed 98% of Democrats said they wore a mask outside home during the past week, compared with 66% of Republicans and 85% of independents.

Adding to the confusion, medical experts have sent mixed messages about when and how masks should be worn. While the World Health Organization has recommended masks in general, it said last month that there’s “no direct evidence” on the effectiveness of mass mask-wearing among healthy people. Other health officials say that while a mask won’t protect the person wearing it, it can help stop sick people from infecting others.

The politics may be shifting as some policy makers try to avoid more shutdowns. In Arizona, Republican Governor Doug Ducey was initially reluctant about masks and hesitant to let local officials in his state impose rules requiring them. But in recent weeks, as the number of coronavirus cases swelled in the battleground state, Ducey has encouraged everyone to wear a mask.

Without measures like mask-wearing to reduce the opportunity to spread the virus, the health and economic consequences will worsen, said Eric Toner, senior scholar at the Johns Hopkins Center for Health Security. “And we will have no choice but eventually to lock things down again, which would be devastating to the economy,” he said.

But as major corporations lobby for a federal mask mandate, questions of enforcement remain. In places that have already mandated masks, making that happen in practice has largely fallen on the heads of businesspeople like Tina Yake, owner of The Wooden Spoon restaurant in Overland Park, Kansas.

Governor Laura Kelly, a Democrat, ordered mask-wearing last week but counties were allowed to opt out and enforcement was left to local authorities. Johnson County, where The Wooden Spoon is located, went along with the mandate; the area includes the Kansas City suburbs along the state’s border with Missouri.

Yake said initially the restaurant put up a sign telling customers to check in at the front and wear a mask. “Those that didn’t want to wear a mask or check in, would leave in a huff,” she said in an email. The restaurant ended up adding a second, and then a third, sign with a neon pink border, as well as posting on social media that masks are required.

Despite some customers getting angry at the mask policies, Yake said the restaurant hasn’t faced adverse effects, and the requirement may even be helping business. “We have been congratulated and thanked for taking a stand on the mask issue and doing everything we can to keep our customers and staff safe,” she said in the email.

The opposite appears to have happened for The Grille at Flower Hill, a restaurant in Gaithersburg, Maryland, outside Washington. The establishment closed indefinitely after its owner received death threats over his refusal to follow the state order requiring masks for staff, according to local publication Bethesda Beat. The restaurant owner could not be reached for comment.

Alan Cobb, president of the Kansas Chamber of Commerce, called measures including face masks and social distancing “vitally important,” but brought up concerns.

“It should not be the responsibility of businesses to enforce mask mandates,” he said in a statement, adding that state and local governments should be clear on what is required for businesses.

Davis Senseman, a Minneapolis attorney who has consulted with small businesses on face-mask enforcement, said government regulations are a “floor” and businesses can put in place more safety measures that customers tend to appreciate.

Senseman likens face-mask requirements to the signs in some businesses warning: “No shirt, no shoes, no service.”