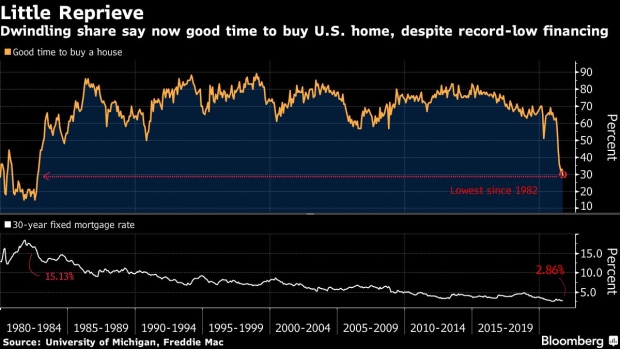 (Bloomberg) -- The last time Americans were this turned off by the U.S. housing market, borrowing costs were over five times the current rate.

The share of people who think now is a good time to buy a home fell in September to 29%, extending the plunge from March when the proportion was more than twice as high, data from the University of Michigan consumer sentiment survey showed Friday. It’s also the smallest chunk of respondents since 1982.

Back then, the average for a 30-year fixed rate mortgage topped 15%. That compares with today’s 2.86% rate, according to Freddie Mac.

The figures highlight how property price appreciation has rattled prospective buyers and more than offset the bright side of cheap borrowing. Prices have skyrocketed amid low inventory as Americans compete for space, with year-over-years gains on previously-owned, single-family homes exceeding 20% --surpassing the inflation-fueled increases seen in the late 1970s and early 80s, according to the National Assocation of Realtors.

The median selling price of such properties rose 18.6% in July from a year earlier to $367,000, a slight drop from the previous month. August figures due next week will show if fed-up homebuyers have helped extend the cool-off.