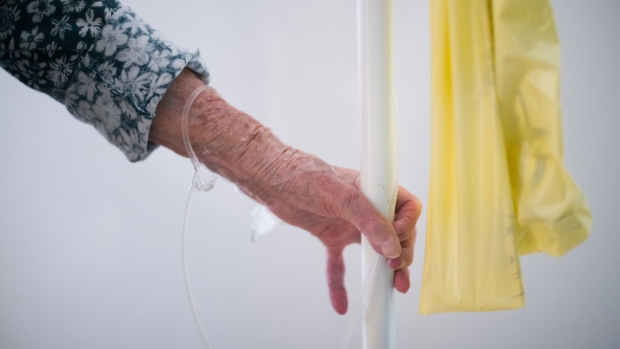 An elderly resident holds onto an intravenous drip stand at a care home for senior citizens as visiting restrictions are eased in Paris, France, on Monday, April 20, 2020. France reported 547 new deaths linked to the coronavirus on Monday, becoming the fourth country to report more than 20,000 fatalities from the pandemic, behind Italy, Spain and the U.S. Photographer: Nathan Laine/Bloomberg , Bloomberg

(Bloomberg) -- President Joe Biden hailed a drop in premiums for the elderly and disabled on Medicare and lashed out at Republicans for opposing measures he said would also ease the burden on American families.

Speaking at the White House on Tuesday, Biden said the premium cut shows his administration is reducing costs for health-care services, even though last year’s payments were inflated due to costs associated with a new Alzheimer’s drug.

“For years, that fee has gone up -- now for the first time in more than a decade it’s going to go down for millions of seniors and people with disabilities on Medicare,” Biden said. “That means more money in their pockets while still getting the care they need.”

Elderly and disabled Americans on Medicare will pay less in monthly premiums and deductibles next year as the program has spent less than expected on drugs and other services in 2022, the Department of Health and Human Services said earlier Tuesday.

In his remarks, Biden also touted measures to curb costs in Democrats’ massive health, tax and climate package, in particular allowing Medicare to negotiate drug prices for the first time, calling it “a godsend to many families.”

The law also capped the out-of-pocket cost of insulin at $35 per month for Medicare beneficiaries, but Republicans blocked a provision that would have extended the cost cap to private insurance. Republicans uniformly opposed the Inflation Reduction Act that introduced those measures in the House and Senate.

“I wish I could say Republicans supported this progress in reducing health-care costs and strengthening Medicare. That would be good for all Americans, but they have a very different idea,” Biden said. “Every single Republican voted against the Inflation Reduction Act when it actually came time to do something about inflation around the kitchen table.”

Biden said 158 House Republicans had signed onto a GOP budget that would cut Medicare and Social Security.

“I have a different idea. I’ll protect those programs. I’ll make them stronger,” he said.

Biden has sought to show Americans that his administration is trying to fight inflation, which remains a persistent political liability for Democrats ahead of November’s midterm elections.

On Monday, Biden also convened a meeting of the White House Competition Council, where he criticized airlines and internet-service providers for “hidden fees” and touted proposals to force them to be more transparent about consumer charges.

The cut in Medicare premiums follows an unusually large 15% increase in premiums for 2022. About half of that hike -- roughly $11 a month per beneficiary -- was driven by anticipation that Medicare would have to pay for Biogen Inc.’s controversial Alzheimer’s medication, Aduhelm. Medicare later limited coverage of the drug to people in approved trials, citing unclear evidence of benefit.

Even with the premium cut, seniors will pay more for Medicare coverage than they did two years ago. The standard monthly premium increased from about $149 in 2021 to $170 this year. It will decrease to about $165 for 2023. Individuals earning more than $97,000 a year pay more based on their income. The increase in premiums in 2022 was the largest in dollars in the program’s history, according to AARP.

After Medicare decided in April to restrict coverage of Aduhelm, the Biden administration faced calls to reduce premiums mid-year, but the agency held off until now.

The prospect of new high-cost therapies for common conditions like Alzheimer’s has raised concerns about how the program will pay for them. Conflicting data from the Aduhelm trials about whether it slows the course of the disease, along with known risks of side effects, led Medicare to limit reimbursement. More drugs for Alzheimer’s are in development, though, and if one with proven benefits reaches the market, it could lead to further premium hikes.