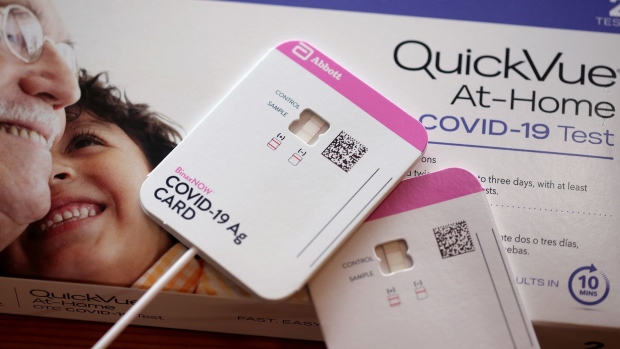 In this photo illustration, at-home COVID-19 tests by Abbott and Quidel are shown on September 14, 2021 in Chicago. , Photographer: Scott Olson/Getty Images

(Bloomberg) -- Searches for Covid-19 tests on Google are surging as the delta variant spreads in the U.S. and more employers and large-scale events require testing.

The number of Americans looking up “at-home Covid test near me” on the platform has doubled in the past month, according to Google Trends, while those asking how long rapid test results take is up by 250%. In the past week, users were also more interested in searches related to tests, rather than vaccines, in most states, with Louisiana and Mississippi as exceptions.

The highly contagious delta variant has kept cases high in the U.S. This is creating the need for more tests as children return to school, workplaces resume activities and consumers head back to concerts and events.

This appears to have taken manufacturers by surprise after months of flagging demand. The Biden administration also recently announced plans to require either vaccination or weekly testing for companies with 100 or more employees. That comes on top of the federal-worker mandate.

With about 81 million Americans working at firms with 100 or more employees as of early 2020, according to the U.S. Bureau of Labor Statistics, if a quarter remain unvaccinated, around 20 million tests could be needed every week by U.S. companies. That’s double the current rate of testing, according to data compiled by Bloomberg.

Last month, CVS Health Corp. limited the number of over-the-counter Covid-19 tests costumers could get to six online and four in its stores, citing high demand. Some other online retailers have also run out of rapid tests.

While public-health experts have advocated for wide access to rapid, at-home testing since the start of the pandemic, the technology was slow to become available for use by consumers outside of medical settings. Only about half a dozen at-home rapid tests have been authorized by the U.S. Food and Drug Administration, which has limited availability.