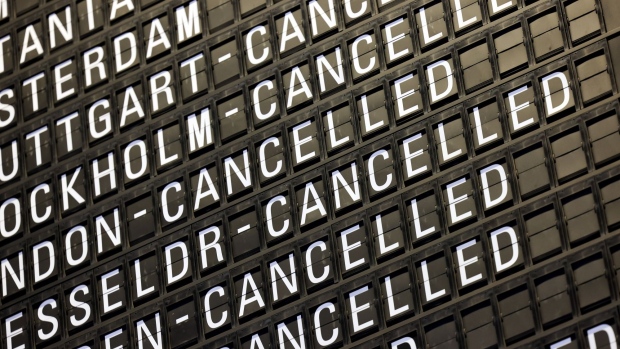 Flight information boards display cancelled flights in the departures hall, during a Deutsche Lufthansa AG pilot strike, at Terminal 1 of Frankfurt Airport in Frankfurt, Germany, on Friday, Sept. 2, 2022. Lufthansa suspended almost its entire flight operations in Frankfurt and Munich because of a strike by pilots who are demanding higher pay, adding another day of major disruptions to what has already turned into a summer of travel chaos. , Bloomberg

(Bloomberg) -- With life returning to normal, the post-pandemic travel boom has created a burst of grumpy customers.

Crowded airports, jammed parking lots and standing-room only bars and restaurants have left many feeling frazzled. Satisfaction with the overall experience slipped on a measure of traveler sentiment on J.D. Power’s 2022 North America Airport Satisfaction Study, after hitting an all-time high in 2021 when passenger volumes were low. And there doesn’t appear to be any relief in sight.

“The combination of pent-up demand for air travel, the nationwide labor shortage and steadily rising prices on everything from jet fuel to a bottle of water have created a scenario in which airports are extremely crowded and passengers are increasingly frustrated—and it is likely to continue through 2023,” Michael Taylor, travel intelligence lead at J.D. Power, said in the report.

Inflation is also taking a bite out of the adventure.

Nearly a quarter of the travelers surveyed said they didn’t make any food or beverage purchases at the airport because they were too expensive and that parking, which also costs more, was nearly impossible to find.

Of the mega US airports with 33 million or more passengers a year, here are the four that scored the highest on passenger satisfaction ratings:

And passengers were least satisfied with: