Americans have rapidly changed the ways they buy, cook and eat food in just four months, leaving everyone from farmers to restaurants unable to match their pivot.

U.S. consumers, whose previous food preferences were stable enough that farmers could often make reliable planting decisions years in advance, have shifted their habits at a torrential pace during the coronavirus pandemic. That includes cooking more at home, buying more organic food, purchasing in bulk, forgoing brand-name treats and eating smaller meals due to fewer trips to restaurants with their often oversized portions.

Even one of those changes by itself could throw a wrench in the global food supply chain. Add all five together, and some suppliers are finding they can’t adapt fast enough to keep pace with all the changing consumer demands. Farmers like Jack Vessey, a lettuce grower in California, have been forced to destroy crops after restaurant demand dried up, while Oreo-maker Mondelez International Inc. is cutting its product offerings by 25 per cent to simplify logistics.

“The entire food supply chain has been put on its head,” said Kevin Kenny, chief operating officer at Decernis, an expert in global food safety and supply chains. “Nobody can really do a post-mortem because we are still in the middle of it.”

The ways Americans are changing their food habits are not only multiple and significant — they’re also potentially permanent.

Almost a third of U.S. adults say they plan to cook at home even more than they do now, once stay-at-home recommendations have lifted. Home-kitchen purchases back that up: In the early weeks of the pandemic, U.S. sales of electric pasta makers grew more than five times what they were a year prior. Breadmaker sales more than quadrupled, according to data from NPD Group.

But those Americans cooking more at home aren’t pantry loading the same way they used to. More than a quarter of adults purchased items in bulk more often, according to a survey of 2,200 Americans conducted by Bloomberg News and Morning Consult. Brands have also fallen out of favour, as 23 per cent of respondents said they purchased generic or store brands more often. In fact, 16 per cent of Americans plan to buy private-label or bulk items even more frequently once the pandemic ends than they did before lockdowns. 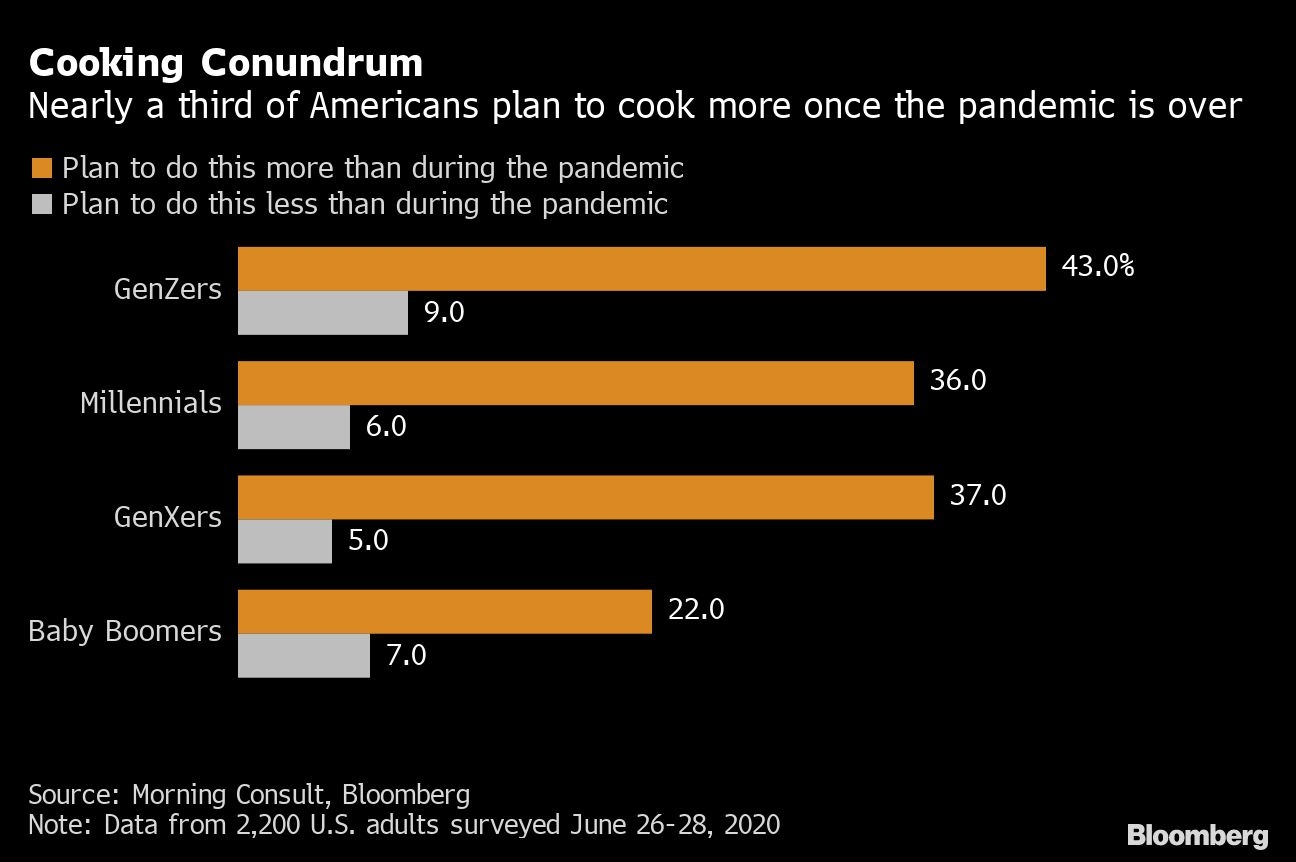 As consumers cook more at home, driving up grocery store sales, they’re steering clear of restaurants, which has big implications for how suppliers package and sell their meats and produce -- and for demand. Restaurant portions are bigger, and meat, cheese and butter in particular are consumed in higher quantities at restaurants, but so are vegetables.

Before the pandemic, Americans spent more than half their food budgets on dining out. Over the next 12 months, 70 per cent of consumers plan to significantly decrease spending on restaurants, according to a Bank of America survey.

That spells bad news for farmers who’ve already suffered through low prices and a trade war with China in recent years.

Vessey, a fourth-generation farmer in California, is one produce grower who’s found himself in the middle of the shift. He was forced to destroy about US$1.5 million worth of lettuce after lockdowns went into place in March. About half his crop usually ends up in food service, and he wasn’t able to redirect supplies when restaurants shuttered.