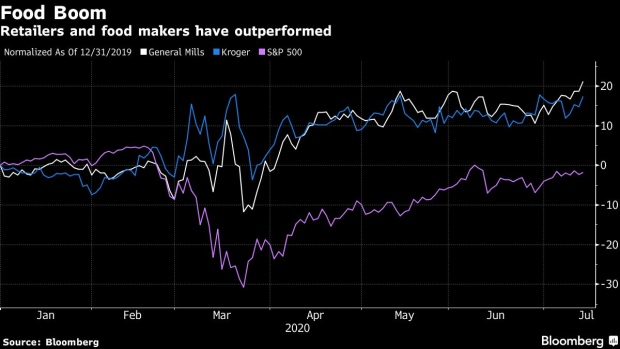 A customer wearing a protective mask shops at a grocery store in Paramus, New Jersey. , Bloomberg

(Bloomberg) -- Americans are shelling out more for premium foods, including organic meat and snacks, as the pandemic moves them to focus on health despite the economic slowdown.

Many consumers are prioritizing nutrition over cost as Covid-19 infections continue to rise across the U.S. Sales of organic food and drinks surged 25% for the 17-week period ended June 27, according to Nielsen data. That’s faster than the pace of total growth in the food segment.

Meat, seafood and frozen foods with the organic label have seen some of the largest increases from last year, the data show.

“We’re expecting strength to continue in organic and natural food sales,” said Bloomberg Intelligence analyst Jennifer Bartashus. With lockdowns to prevent the spread of the virus, “a lot of people have used the opportunity of working from home to really make a lifestyle change -- lose weight and exercise,” she said.

Private-label organic products have seen growth at retailers including Kroger Co. and Albertsons Cos., Bartashus said. Packaged-food companies including General Mills Inc. have also seen a boost for their organic offerings as consumers continue to stock their pantries.

Consumers are grabbing more organics off of the grocery shelf in an effort to take care of family and friends, said General Mills Chief Executive Officer Jeffrey Harmening. The food maker saw a boost in its organic portfolio in the fourth quarter, in particular its Annie’s macaroni and cheese brand that’s popular with families.

Poultry maker Bell & Evans has seen roughly a 25% jump in its organic chicken sales since the pandemic began. The company is now boosting production and finding more farmers to provide birds for its organic frozen and fresh poultry.

The organic food market has changed since the 2008 recession, said Laura Batcha, the CEO of the Organic Trade Association. New organic private labels grew 49% during that time, providing consumers with a range of options where they can choose a price point that works for their budget, even within the organic world.

“You can get the high-end, award winning organic cheese, or you can buy the organic cheddar that’s two dollars,” she said.

Still, higher unemployment has also meant that more Americans are struggling to put food on the table. So the trend for organics is likely not happening on equal terms across the board.

At New Barn Organics, which makes almond milk, the brand is “well regarded in a slightly older household that’s well educated,” and also does well on the Coasts and certain suburban pockets, CEO Ted Robb said.

Among those buyers, “people are starting to look at what they’re consuming more thoughtfully now,” Robb said.

At the same time, declines in other discretionary spending also open up more room for premium foods.

“People are not going to fly. They’re not going to the salon,” Robb said. “Even though we’re in a recession, and people are trying to be careful, food is one area where they can spend a little bit more.”

Online sales are also helping. At California organic-food maker Perfect Snacks, the company’s eCommerce sales roughly doubled for its refrigerated protein bars and snacks. The company has even sped up the introduction of two new flavors by several months, with plans to sell them later this year. And it’s planning a pumpkin-pie variety for September.