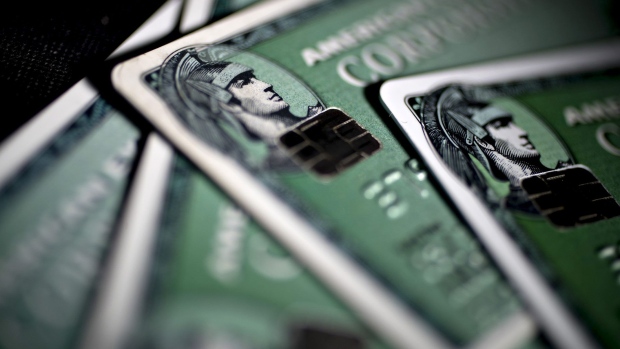 American Express Co. customers are still paying US$550 a year for a premium travel card during the pandemic, they’re just not using it as much while stuck at home.

Revenue and spending on cards each fell roughly 30% in the second quarter despite the firm’s efforts in the early days of the Covid-19 outbreak to rework some of its most popular products, adding benefits such as credits for streaming services.

“Our second-quarter results reflect the challenges of the current environment,” Chief Executive Officer Steve Squeri said in a statement Friday. Early results from the new rewards programs “have been encouraging. We haven’t seen an increase in total customer attrition levels from prior years.”

While card fees climbed 15 per cent, revenue dropped 29% to $7.68 billion, missing analysts’ estimates. And AmEx’s discount rate -- a measure of the fees the company collects from merchants each time consumers swipe their cards at checkout -- fell to 2.23 per cent from 2.37 per cent a year earlier.

AmEx shares slipped 1.7 per cent to US$95 at 8:15 a.m. in New York trading. The stock dropped 22 per cent this year through Thursday, outpacing the 21 per cent decline of the S&P 500 Financials Index.

AmEx, which counts Delta Air Lines Inc. and Marriott International Inc. as its two biggest partners in the co-brand card business, is grappling with the worldwide slowdown in travel and dining. Spending on its cards dropped 34 per cent to US$205 billion, missing the US$215 billion average of analyst estimates compiled by Bloomberg.

Despite the new benefits, the firm’s spending on rewards dropped 49 per cent to US$1.35 billion in the quarter. Overall profit declined 85 per cent to US$257 million, or 29 cents a share, as the company set aside US$1.56 billion to cover souring loans.

“Looking ahead, we will continue to focus on what we can control -- backing our customers, colleagues and communities, while managing our expenses prudently,” Squeri said in the statement.