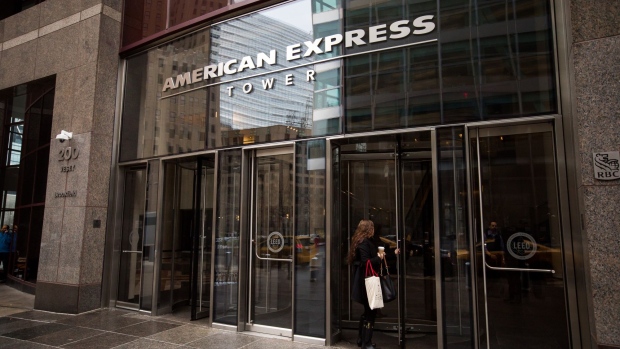 A person enters the American Express Tower in New York, U.S., on Friday, March 1, 2019. A rally in shares of technology companies helped push the broader U.S. equity market up from the lows of the day. Treasuries fell for a third day and oil slumped. Photographer: Michael Nagle/Bloomberg , Bloomberg

(Bloomberg) -- American Express Co. will allow employees to work from wherever they want at least four weeks a year as part of the company’s push to offer greater flexibility even after the pandemic subsides.

AmEx will place employees into one of three groups: hybrid, on-site or fully virtual, Chief Executive Officer Steve Squeri said in a memo to staff on Monday. A “large majority” of workers will likely work hybrid schedules, with 80% of employees having told the credit-card giant they’d like to come back to the office at least some of the time, he said.

“We expect that the majority of hybrid colleagues will be in the office two days per week on average and can work from home on the other days,” Squeri said. “We also expect that teams within a business unit will determine their schedules and will define common days when they are in together as a team.”

On top of those changes, AmEx is adding a “work from anywhere” policy that allows all employees to have the opportunity to work as many as four calendar weeks a year from a location other than their primary work location, “during which they will not have to come into the office at all,” Squeri said. The weeks don’t have to be taken consecutively.

AmEx is embracing a significant amount of remote work long-term as companies nationwide grapple with filling offices a year and a half after sending the vast majority of staffers home to curb the spread of Covid-19. For employees in the U.S., the U.K. and Germany, AmEx’s new model won’t go into effect until Jan. 24 at the earliest, while other markets will make their transition based on the timing of local conditions and regulations.

Employees in the on-site category are likely to work from the office four to five days a week, according to the memo. The designation probably will apply to a “relatively small percentage” of AmEx’s workers, such as security or certain facilities-operations roles, Squeri said.

In a company survey conducted earlier this year, roughly a fifth of staff told New York-based AmEx they’d like to work completely remotely, the CEO said.

“Our experience over the past 18 months supports our decision to build in a fully virtual designation that more colleagues will be able to take advantage of going forward,” Squeri said.