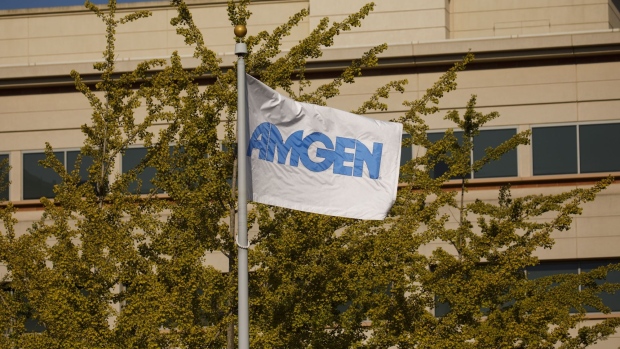 A branded flag flies outside Amgen Inc. headquarters in Thousand Oaks, California, U.S., on Thursday, Aug. 27, 2020. Amgen is among the world's biggest biotechnology companies with a market value of about $137 billion, though it's replacing a company -- Pfizer Inc. -- that is about $90 billion larger. Photographer: Patrick T. Fallon/Bloomberg , Bloomberg

(Bloomberg) -- Hummingbird Bioscience, a Singaporean clinical-stage biotechnology firm, is considering fundraising options including an initial public offering, according to people familiar with the matter.

The company is interviewing investment banks as it weighs alternatives, which also include a private funding round, the people said, asking not to be identified because the matter is private.

Hummingbird could seek to raise about $200 million to $300 million in a share sale, which could take place as soon as later this year, the people said. The company is leaning toward the U.S. as a preferred listing venue, they added.

It plans to use part of the proceeds to support business expansion, the people said. No final decision has been made, the people said. Details such as the type of fundraising, size and timing could still change, they said.

Hummingbird Bioscience is unable to comment on the speculation regarding an IPO, it said in an emailed statement in response to a Bloomberg News query. As a growth-stage biotech company, Hummingbird is continuously exploring future financing options, and remains focused on delivering against its development program and strategy, it said.

The company focuses on developing treatments in areas such as oncology and autoimmunity in collaboration with global partners in academia and industry, according to its website.

Hummingbird raised $125 million in a series C financing round in May led by Novo Holdings, the Danish private investor which is the controlling shareholder in Novo Nordisk A/S, the world’s largest maker of insulin. Other investors include Amgen Ventures, the venture capital arm of U.S. biotech giant Amgen Inc.