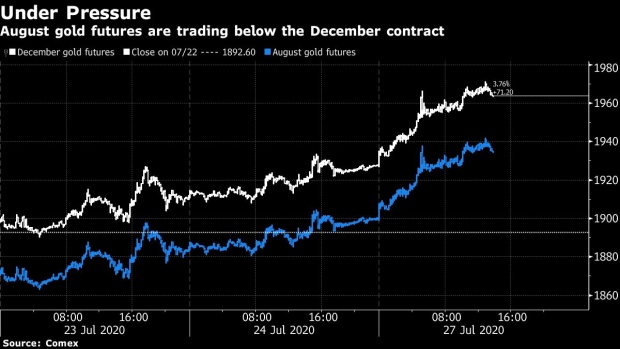 (Bloomberg) -- Global gold prices are printing records, but on the main gold-futures exchange in New York a more parochial dynamic is playing out.

As this mass shift plays out, August futures are trading far below the December futures into which most traders are rolling their positions. That’s an indication that more traders are looking to deliver to the exchange than take delivery, as metal coming into New York puts pressure on the price of the near-dated contract.

It’s a repeat of a dynamic that’s played out across precious metals in recent months as huge amounts of bullion have flowed into New York and the Comex has seen record deliveries.

The situation began in March, when concerns about coronavirus lockdowns prompted a disconnect between prices in the two main markets, London and New York.

Futures, which typically trade in lockstep with the London spot price, soared to a premium of as much as $70 an ounce. That move inflicted losses on many banks, which typically sell futures to hedge their positions in the over-the-counter London market.

Since then banks and other dealers, whose trading typically ensures that the two markets remain in sync, have been more cautious about adding positions. The result has been regular flare-outs during which New York futures have traded at meaningful premiums to London spot prices. In response, arbitragers have shipped record quantities of precious metals to New York to capture the price differential.

As the nearby futures contract approaches delivery, that metal weighs on the price of the nearby contract relative to other contracts. As of mid-morning London time on Monday, while August futures were trading at $1,938.70 an ounce, December futures were trading almost $30 higher at $1,968.30. And August futures have in the past few days been trading at a discount to the spot price.

It’s not just the nearby contracts which have been affected. The whole curve is trading in a significant contango. So much so, that even as traders watch for an attempt at $2,000 an ounce, gold futures for delivery in December 2021 have already traded at $2,006 on Monday morning.