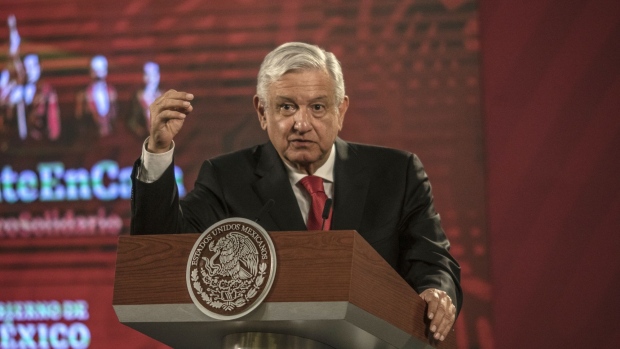 (Bloomberg) -- President Andres Manuel Lopez Obrador said Mexico may need to change the rules governing the country’s energy industry and reverse the opening to private companies to save state oil giant Petroleos Mexicanos, according to a memorandum seen by Bloomberg News.

In a July 22 document addressed to government officials and energy regulators, Lopez Obrador writes that a constitutional change should not be ruled out in order to reach the “higher goal” of his administration: recover Mexico’s control over its oil and electricity industries, including state owned Comision Federal de Electricidad, or CFE.

“We must advance to the limit permitted by the current legal framework. However, if in order to apply the new rescue policy to Pemex and CFE we need to propose a new energy reform, we don’t rule out that possibility,” AMLO, as the president is known, writes in the document.

The veracity of the presidential memo was confirmed by an official familiar with the publication.

The document is the latest salvo in the administration’s effort to help the country’s embattled state-run energy companies at the expense of international companies that have invested billions since the end of the state monopoly in 2014.

Still, a constitutional change would be a new departure for the administration, which has so far resisted such a measure even though Lopez Obrador’s alliance of parties has a majority in both chambers of congress. The president first floated the idea of amending the constitution in a press conference last week.

The energy reform, which allowed awarding more than 100 contracts to private firms, was akin to “politics of pillage”, AMLO writes in the document, saying that it was only possible thanks to “bribes given to the majority of lawmakers and through media deception.”

Among the 16 measures mentioned in the memorandum is a proposal to increase Mexico’s crude oil production to 1.8 million barrels per day this year and 2.2 million by 2024. The president would also build and revamp electrical plants in the country’s southeast to address scarcity, and increase the use of hydroelectric power, capping private sector electricity generation at 46% of the country’s consumption.