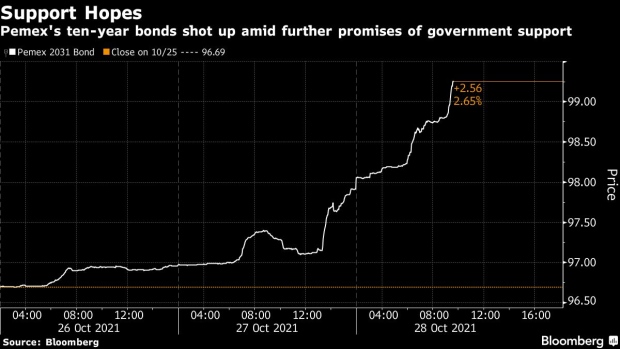 Petroleos Mexicanos Chief Executive Officer Octavio Romero told lawmakers Wednesday that the federal government would assume responsibility for its bond payments, leading to a sharp rally in notes from the beleaguered company. Pemex has about $36 billion in debt coming due by the time Lopez Obrador’s term expires in September 2024, according to data compiled by Bloomberg.

Romero’s comments were light on details, and both the Finance Ministry and the president’s office have declined to offer any specifics about the guarantee or even back up the idea of what Romero said at all. While there’s always been an implicit understanding that the government would rescue Pemex if it needed to, Romero’s comments move closer to suggesting that the support is official policy in this administration.

Traders snapped up the bonds following Romero’s comments, wagering that an explicit guarantee from the government made Pemex’s debt much more appealing. Notes maturing in 2031 cemented their best two-day gain since March as they climbed to 99 cents on the dollar, and both credit default swaps and spreads against equivalent U.S. Treasuries tightened on Thursday.

“This is more of the same, i.e., more government support for Pemex,” said Edwin Gutierrez, a money manager at Aberdeen Asset Management in London, who holds Pemex bonds. “It’s why we continue to like Pemex at prevailing spreads versus the Mexican sovereign.”

Still, Gutierrez says he wouldn’t read too much into Romero’s comments for now, adding that the government’s approach will continue to be piecemeal.

“These were just some off-the-cuff remarks he made,” Gutierrez said. “They’ll pay what they think they can afford to pay.”