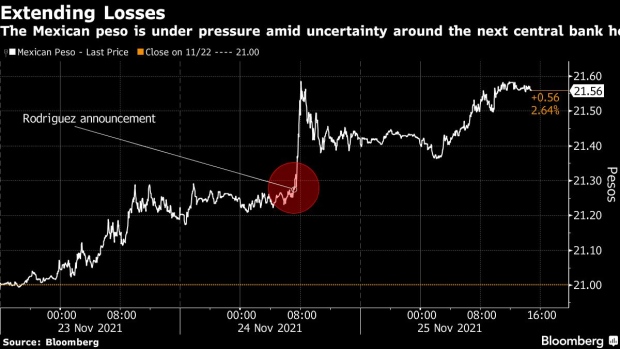 (Bloomberg) -- Analysts are pulling back from bullish Mexican peso bets after a one-two punch from soaring inflation and the president’s surprise, last-minute nomination change for the head of the central bank. It’s undermining the currency just as a new variant of Covid-19 triggers a global flight from risk.

The currency slumped as much as 2.6% early Friday, extending losses from Wednesday when President Andres Manuel Lopez Obrador swapped his nomination for the central bank governor from former Finance Minister Arturo Herrera to Victoria Rodriguez -- a finance ministry official with little experience of monetary policy -- and inflation hit a two-decade high.

Following the announcement, Barclays analysts closed a long peso call, while longstanding peso bulls at BBVA warned that the currency will remain under pressure as long as the uncertainty around the new central bank head persists. Investors are concerned that under Rodriguez the bank, known as Banxico, would struggle to resist potential political pressures to focus monetary policy on reviving lackluster growth, rather than tackling inflation.

“Banxico’s approach to the hiking cycle may increasingly disappoint market expectations,” said Sacha Tihanyi, the head of EM strategy at TD Securities in Toronto. “With the upcoming change in Banxico’s governor, there is an increased probability of a dovish shift.”

Tihanyi repeated his bearish peso call after the announcement, including targeting 22.06 to the dollar in the next few months. The currency broke through 21.5 briefly on Wednesday, before tumbling as low as 22.155 on Friday amid the global flight to safety. As of 6:30 a.m. in New York, the peso was down 1.2% at 21.825.

Rodriguez’s nomination came about an hour after the national statistics bureau reported that consumer prices rose 7.05% in the 12 months through mid-November, up from 6.36% two weeks earlier and more than expected by analysts.

The subsequent slump in the peso led Christian Lawrence, a Rabobank strategist in New York, to reconsider his call to take profit at 21.5 per dollar.

“I’m reassessing to be honest, things aren’t looking good,” Lawrence said. “There’s an unknown at the head of Banxico, which has been an anchor of stability.”

The central bank has raised rates in four quarter-point moves since June and was expected to make another similar hike next month. After the announcement that Rodriguez will be nominated, Mexico’s top economists scrambled for hints about her inflation views.

Bank Governor Alejandro Diaz de Leon -- who normally votes with the board’s hawks -- is due to step down at the end of December. Rodriguez’s appointment now needs to be approved by the Senate.

“Rodriguez would be wise to advance some of her views regarding monetary policy and try to convey some calm to markets,” wrote Mexico City-based BBVA strategist Claudia Ceja in a note on Wednesday. “MXN-wise, the scope for a stronger appreciation is now more limited, at least until we have more insight on Rodriguez’s approach.”

Elsewhere in Mexican markets this week, the nation’s dollar-denominated and peso-denominated bonds both weakened, joining declines in the peso. Mexican corporate bonds gained on average.

Next week, Mexico will report its unemployment rate for October, which is expected to edge lower to 4.11% from 4.18% the month prior. PMI data, international reserves, the budget balance and October remittances are also due.