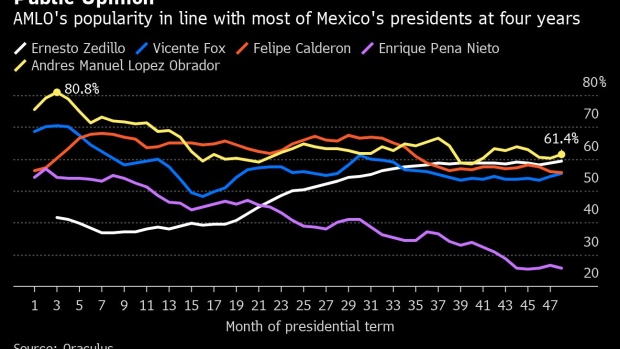 Andres Manuel Lopez Obrador, Mexico's president, center, greets attendees during a rally in support of the proposed electoral reform in Mexico City, Mexico, on Sunday, Nov. 27, 2022. AMLO took thousands of Mexicans to the streets for the first time since he took office in 2018, celebrating the upcoming fourth anniversary of his rule. , Bloomberg

(Bloomberg) -- Mexico President Andres Manuel Lopez Obrador, known as AMLO, is among the world’s most popular presidents, yet isn’t rated much above his most immediate predecessors at this point into his six-year presidential term. At 61%, Lopez Obrador, who took office Dec. 1, 2018, is only two percentage points above the 59% approval scored by Ernesto Zedillo, who ruled from 1994 to 2000, according to Oraculus, which calculates a poll of polls of Mexican presidents. Vicente Fox and Felipe Calderon, who held office between 2000 and 2012, are just behind Zedillo at 56%. The outlier is Lopez Obrador’s immediate predecessor, Enrique Pena Nieto, who was plagued by years of corruption scandals.