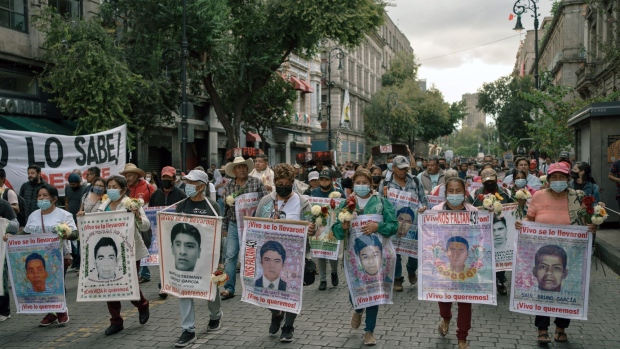 Demonstrators during a rally on the anniversary of the 2014 mass kidnapping of Ayotzinapa students in Mexico City, Mexico, on Monday, Sept. 26, 2022. The Mexican army's role in the disappearance of 43 college students, its participation in covering up the facts and its alleged links to organized crime are now at the center of a case that has shaken the nation, reports the Associated Press. , Bloomberg

(Bloomberg) -- New revelations about the role of Mexico’s military in one of the country’s most horrific massacres in recent decades is complicating President Andres Manuel Lopez Obrador’s push to put the army at the center of his security strategy.

A truth commission established by the president alleged last month that an army colonel ordered the murder of six of the 43 students who went missing in 2014. Then, earlier this week, documents leaked to the press described grisly details about how a criminal group tried to get rid of the students’ bodies, suggesting troops helped hide some of their remains.

Eight years after students of the teachers’ college in the town of Ayotzinapa disappeared, the new revelations rocked the nation and led to several protests in Mexico over the past week. Lopez Obrador has struggled to strike a balance between carrying out his pledge to dig up the truth in the case while not discrediting the army, a key ally whose role he has expanded extensively to building most of his key infrastructure projects and taking charge of customs and ports.

“There are, in the investigation, five members of the military, those at the top of the hierarchy,” AMLO, as the president is known, said earlier this week, referring in part to the arrest of a retired general. “That doesn’t stain the military. If this group participated in criminal activities, they should take responsibility. The whole institution is not responsible.”

The president grew even more defensive after El Pais reported that the Attorney General’s Office had retracted arrest warrants for 21 out of 83 suspects allegedly involved in the disappearances, with 16 of the canceled orders meant for military personnel. A special prosecutor investigating the students’ case had issued those warrants in August.

“We acted based on the people who appeared as responsible in the report,” AMLO said, referring to his administration’s truth commission report. “That doesn’t mean the investigation is closed.”

The following day, the special prosecutor overseeing the case resigned. The Miguel Agustín Pro Juárez Human Rights Center, which has worked closely with the parents of the disappeared students, said in a statement that these events raised “extreme worry” about justice for the students.

Critics have said that his stepping down coupled with the retraction of arrest warrants gave the appearance that the government was trying to prevent the full extent of military involvement in the missing students case from coming to light.

“The army is a very hierarchical organization. It’s highly probable that top brass were aware of what was happening,” said Javier Martin Reyes, political and legal expert at the National Autonomous University of Mexico.

“This individual episode may only have a marginal impact on the approval of the army by the general public,” he said. “But longer term, as the president keeps assigning new functions to the military that don’t correspond to them, this could affect their approval levels.”

AMLO has pushed for a public consultation early next year on whether the military’s presence in the streets should be extended to 2028 to deal with violent attacks from drug-trafficking and other crime groups, following the failure of a similar proposal in Congress.

He has also fought to bring the National Guard, which was started under his administration, under the control of the Defense Department. Earlier in his government, he had criticized the military’s role in fighting cartels under former Presidents Enrique Pena Nieto and Felipe Calderon.

Another development in the case occurred late Wednesday, when arrested former Attorney General Jesus Murillo Karam won a court stay against charges of alleged abuses committed during his investigation into the disappearances that he led in the previous administration. But he’ll remain in prison for now after his arrest last month, CNN reported.