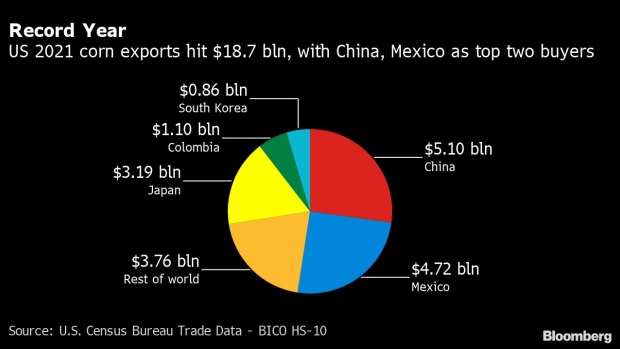 (Bloomberg) -- Mexican President Andres Manuel Lopez Obrador said Tuesday he is willing to go to a trade dispute with the US if the two countries can’t reach an agreement on genetically modified corn.

Mexico will allow imports of GMO yellow corn for animal feed over the next two years, while the government studies whether the practice can harm human health, Lopez Obrador, known as AMLO, said at a daily press conference. If the two sides can’t reach an agreement, Mexico is willing to have the case reach a trade dispute under the US-Mexico-Canada Agreement on trade, Lopez Obrador said.

“When deciding between health and trade, we opt for health,” Lopez Obrador said. “There are mechanisms to resolve these controversies in the treaty, but we have elements to defend ourselves on why genetically modified corn isn’t allowed.”

A trade deal dispute would escalate economic tensions between the two countries, which have been simmering since the US and Canada filed a complaint over Mexico’s nationalist energy policies in July. But Lopez Obrador said they were looking for an “exit” from the spat, and said that US Agriculture Secretary Tom Vilsack was “conscientious” in talks during a visit to Mexico on Monday.

Vilsack said after the meeting they had made “some progress,” but also said that if the issue isn’t resolved, the US would “be forced to consider all options” including action under North America’s trade deal.

Mexico has been saying since early 2021 that it planned to phase out imports of US GMO corn, and step up its own production. Lopez Obrador invited US officials to collaborate on the research into potential harm caused by the GMO crop.