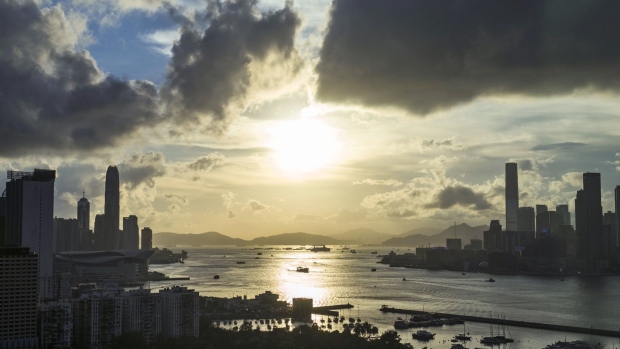 Buildings are silhouetted as the sun sets in Hong Kong, China, on Thursday, June 4, 2020. Hong Kong is facing renewed tensions following months of unprecedented pro-democracy protests that kicked off soon after last June's vigil. Demonstrations have again increased in recent weeks as China announced that it would impose sweeping national security legislation on the city, raising concerns about whether it would maintain key freedoms from the mainland. Photographer: Justin Chin/Bloomberg , Photographer: Justin Chin/Bloomberg

(Bloomberg) -- Amnesty International is shutting its Hong Kong operations citing fear of “serious reprisals” under a China-imposed national security law, the latest civil society group to fold amid a crackdown on freedoms in the city.

The non-governmental organization’s office dealing with human rights issues will close on Oct. 31, while the branch focusing on East and Southeast Asia will shutter by the year’s end, the group said in a release Monday, adding that it will shift regional advocacy work to new locations.

“This decision, made with a heavy heart, has been driven by Hong Kong’s national security law, which has made it effectively impossible for human rights organizations in Hong Kong to work freely and without fear of serious reprisals from the government,” said Anjhula Mya Singh Bais, chair of Amnesty’s International Board, in a statement.

“The law has repeatedly been used to target people who have upset the authorities for any number of reasons -- from singing political songs to discussing human rights issues in the classroom,” she added.

The U.K.-headquartered global human rights organization is one of the most recognizable civil society groups in the city to close in the wake of the security legislation handed down by Beijing in June 2020.

While Hong Kong Chief Executive Carrie Lam has repeatedly said the law has restored stability to the city after the mass protests of 2019, lawyers and foreign governments have criticized the legislation as vaguely-worded and designed to stifle political opposition.

In recent months, authorities have expand a crackdown on dissent to include trade unions, charities, filmmakers and professional associations that engage in what the government deems “political” activities.

Charities face losing their tax exempt status if deemed to be “engaging in or supporting any acts or activities which are unlawful or contrary to the interests of national security,” under guidelines published in September.

The largest teachers’ union and a decades-old organization that ran an annual vigil for victims of the 1989 Tiananmen Square crackdown are among the 35 local groups Amnesty says have closed recently under such pressure.

(Updates throughout with details from statement.)