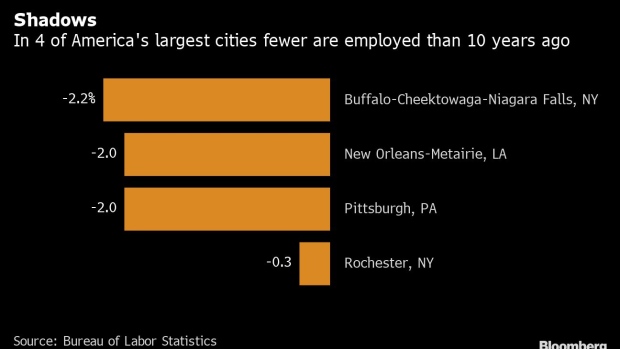 (Bloomberg) -- America’s cities are usually seen as the country’s jobs dynamo, but a surprisingly large number of them don’t fit that description.

Among the 51 metropolitan areas with a 2010 Census population of 1 million or more, about 40% have seen a decline in employment levels compared with five years ago, according to new data from the Bureau of Labor Statistics.

In some cities, including several Californian ones like San Francisco and San Jose, jobs rose sharply in the five years through 2016 but have essentially stalled out since then.

And in four of the biggest cities, the pandemic rebound hasn’t been strong enough to push employment levels back to where they were a decade ago.

Over the past year, all 51 large metro areas posted a decline in unemployment rates as the economy reopened. The extent of the rebound varied substantially, though. Salt Lake City had the lowest jobless rate in October at 1.4%, followed by Oklahoma City. In the L.A. area, unemployment was 7.1%.