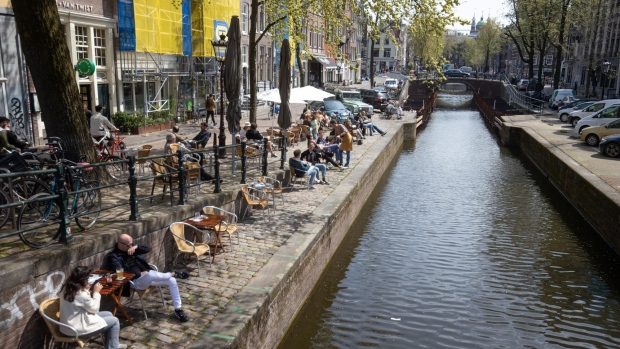 Customers use the canal side seating of restaurants in Amsterdam, Netherlands, on Wednesday, April 28, 2021. Shops and outdoor seating at restaurants and cafes have partially reopened as more people are getting vaccinated. Photographer: Peter Boer/Bloomberg , Bloomberg

An average 8.23 billion euros ($9.75 billion) of shares a day were traded on various Dutch venues in August, compared with 7.63 billion euros for various London exchanges, according to data from Cboe Europe.

London had moved back ahead of Amsterdam as Europe’s largest share-trading center in June for the first time this year after Brexit pushed much of the city’s volumes to the continent. However, its lead only lasted one month before Amsterdam returned to the top in July.

The August volumes compare with about 8.86 billion euros average daily trading value for Amsterdam in July and around 8.67 billion euros for London exchanges.

Britain lost its rights to access the European Union’s single market on Dec. 31 and the bloc has not permitted investors inside its borders to trade shares in companies such as Airbus SE and BNP Paribas SA from the U.K. The EU could eventually reopen access by recognizing the U.K. markets as equivalent to its own, though there has been little sign of progress in negotiations.

The shifts in trading volume between cities is unlikely to have much of an impact on the bottom line for brokers and trading platforms. The region’s biggest players, including the London Stock Exchange Group Plc and Cboe, operate venues in both London and the EU, enabling them to grab a share of the business no matter the location.